ALMOST exactly 2 years ago I posted this exact same statement:

I have literally just packed up every single Dr. Brown's bottle and put them into storage.  Until the next kid, bon voyage bottles! 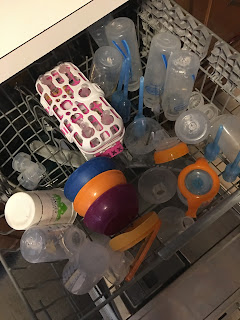 They all got a good washin' last night in the dishwasher and have been dried and packed away until #3 comes along.  I cannot tell you how excited I am about this...well, yes I can, hence the fact that I'm writing this blog post.

Anywho, I remember with Patrick the mixed feelings I had packing away the bottles, how it symbolized he wasn't a baby anymore.  Well, call me cold-hearted, but I don't feel that way AT ALL with Rosie.  Maybe it's cause I'm still nursing her all.the.time. it seems, but golly, I was too eager and excited to pack those bottles up and bid farewell until the next kid. We did a test run yesterday while I was at work and Mike was home with Rosie (Patrick is at the lake this weekend) and then I also had to chaperone a dance at school last night, so there was plenty of time to test these bad boys out.  I went with the above sippy cup, the Munchkin Latch--it is suppose to be good for breastfed babes and a good transition away from the bottle.  Yesterday's "test" session went awesome--Ro drank all of her milk she usually does from her sippy and didn't spill it at all!  Woo hoo! Mike said she didn't really hold it--he had to hold it for her (#diva), but she did awesome drinking out of it and not gagging or spitting on it all over the place.  Go girlfriend.

I don't have any action shots of her with it (as I have almost ZERO pics of her drinking a bottle, since she won't take one when I'm around--gonna try and work on changing that with the sippy cups now!), so those will have to come laterrrrrrr.

But I wanted to write a fun little milestone post about how we've bid farewell to the bottles for Ro and just doing the sippy cups now!  I'm hoping and praying it goes just as well as it did on our test day (cause we've literally cold-turkeyed it!) and she continues to take a sippy well.  The downside about these sippies is that they're only 4oz (Ro usually takes more than that at a time), so we have to refill if she's still hungry.  I only got a few of these kind...figured they're just transitional for now then we'll get her something else that's bigger and can hold more.  I can say every.single.sippy.cup. Patrick used is no longer functional because, not naming any names, but someone bit the tops off of all of them and they are just huge openings now. Ha.