If you recall wayyyyyy back to May of last year, I posted about Crib Gate 2015, where basically Patrick decided shortly after he turned 2 that he wanted to climb out of his crib all.the.time.  I was not ready to move him to a big boy bed quite yet then, especially since we just had one life altering event happen (Rosie's birth) and I wasn't ready to ditch the crib with Patrick at that point too.  So, we rearranged his room, dropped his crib mattress to the floor, and flipped the crib around so the tall side was facing out.  Problem = solved.

Fast forward to just before Christmas: I found a cute little toddler bed on the Swap for $30.  A steal!  I had Mike and his brother go grab it for us to stash for whenever we decided to switch Patrick over.  I was planning on keeping him caged for the foreseeable future, but wanted to have something ready for whenever we made the change.  Honestly, we planned on probably switching him after his 3rd birthday, so a good segue into summer and (hopefully!) potty training.  But, again, I wasn't in any hurry: he was doing just fine in his crib and actually liked in in there, so why change it?!

Well, wouldn't you know it?!  That little stinker through a wrench in my plans (isn't that just typical for a kid to do?! #always)...and on Thursday during nap time at our house (my aunts were over babysitting), he decided to climb out of his crib and play on the floor.  Greattttt.  He hadn't done that since May, but doing it now means he was climbing over the nearly 5 foot part of the crib and jumping out.  To me, that had broken bones in the future written all over it.  I called Mike and said, "I think it's time to move him to the toddler bed..." and Mike concurred.  No use keeping him in his crib knowing he can full well climb out of it. 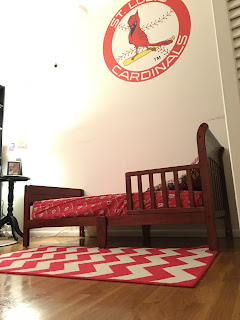 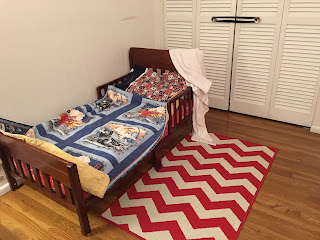 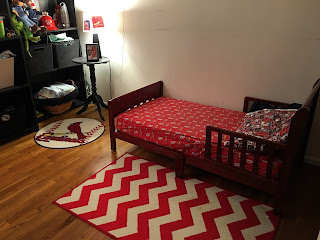 Thursday night Patrick was having a sleepover at his grandparents, so it gave Mike and I a prime opportunity to disassemble his crib and bring his toddler bed up.  I had pretty well Patrick-proofed his room last spring, so there really wasn't many things to move. 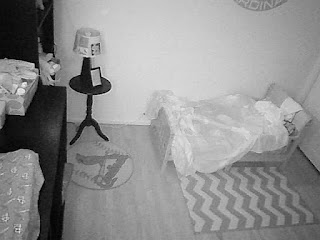 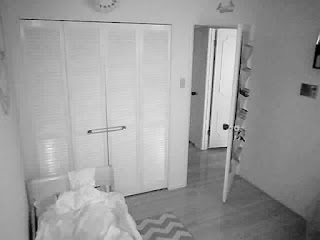 I did rearranged his video monitors so he didn't have obvious wires hanging down for him to pull on, and I did take his humidifier and space heater out for the time being so he wouldn't get out of bed and mess with them.  I bungeed his closet doors together, which I'm sure he could open if he wants to, but hopefully that'll deter him from doing it.  And there's a child handle lock on the inside of his doorknob too, so if he does get out of bed, he can't get out of his room to go mess with Rosie or us.  The rest of his room was pretty proofed already.  I just have to trust him that he won't climb on the shelves or changing table or any of that kind of destructive stuff.

So tonight will be night 1 for him in his toddler bed and to say I'm mildly freaking out and concerned would be an understatement.  I'm SURE everything will go fine, but still, I'm just worried (as is my nature!).

We are going to try a new routine with him to go along with his new bed, so hopefully that'll work to our favor.  We got him a new Paw Patrol blanket for his bed, so we're hoping after he takes his bath and watches one episode of Paw Patrol (as is his usual jam) we'll let him pick a book or two, let him get settled in his new bed, and we'll read the books with him before he goes to bed.  We are also going to reiterate over and over again that he does NOT get out of bed until mom or dad comes and gets him.  That if he needs something he should call out for us but should not get out of bed.  So, we'll see how that goes :)

I'm sure I'll have another post later this weekend or early next week with oodles of pics and a full report on how the first few nights went, so stay tuned for that.

Pray for us that this transition all goes well and is not a big deal AT ALL to go from crib to toddler bed.  I really am paranoid we'll come in one morning and find all of his clean diapers strew about, his dirty diaper pail tipped over and spread all over the room, lotions and creams all over the wall, and his shelf fallen over.  Hopefully not and that's just my paranoia, but if you want to shoot some well wishes or a prayer our way that that doesn't happen, we'd be appreciative of it :) Thanks friends!
Email Post
Labels: bed big boy big boy bed Crib Gate 2015 growing milestone Patrick sleeping toddler bed update