Whew!  Gosh we have been busy little beavers 'round these parts lately thanks to Easter, birthdays (Mike's and Ro's!), and oodles of photo shoots for moi and we are finally justttttt getting settled for a couple weeks before we start the birthday festivities all over again for Patrick.  I haven't really done a catch-up post lately so I figured I'd do a hodge podge one that I'm sure will be all over the place but whatevs, you'll at least be caught up with the recent happenins' with the Mooney clan. 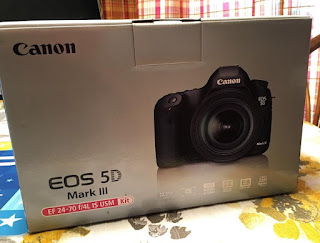 So!  First off, important stuff: I GOT A NEW CAMERA!!!  It is another full frame, a Canon EOS 5D Mark iii and I am so freaking excited about it.  I actually got it about an hour before Ro's party on Saturday and I snapped all of her party pics with it!  Then I had a newborn shoot on Sunday (Baby Rylan) that I snapped with it and another newborn on Monday (Baby Franki) that I did too and OMG, I don't know if it's just the "new camera" feel or what not but it's freaking awesome and I love it so much. 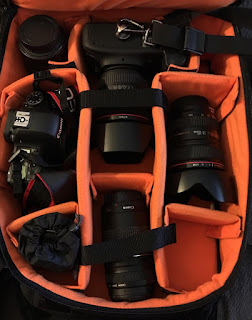 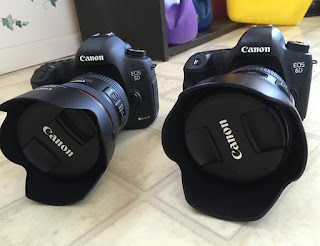 My camera bag is jam-packed with both of my full frame cameras (now Mike has a full frame one to shoot with too when we do dual shoots and weddings!!) and all my lenses.  This gal is one happy photographer!  I really feel like I keep getting better and better with each shoot and learning so much from YouTube, online tutorials, and these Facebook photog groups I'm in!  I'd love maybe one day to have a studio and do this full time, but until then, I'll keep snappin' on the side :) 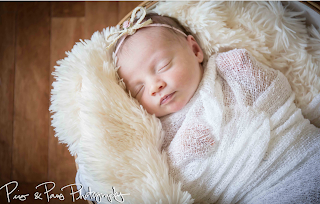 I was playing around with the Photoshop tablet I brought home from school to practice "tableting" stuff before demoing it to my Computer Graphics class and I created a new watermark for my photog business!  I love the handwriting doodle I did and it's great for now, but I'm hoping to play with it some more and perfect it.  I love the handwriting watermarks others use so I wanted to replicate it. 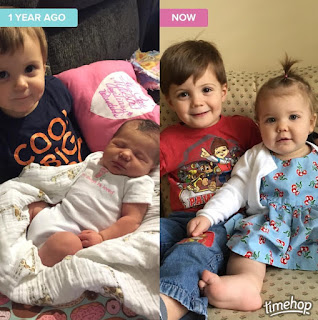 Sunday was National Siblings Day so I did this lovely comparison pic between Patrick and Ro a year ago and today.  Wow, how much they've both grown up in just a year!  Cue my mommy tears and aching for a newborn again! 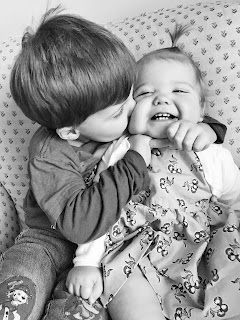 And this snap MELTS MY HEART.  The way he grabs her and hugs her and smothers her with kisses is 100% his own doing and I die every.single.time. he does it.  Is he not the sweetest big brother EVER?!  Biased, I know, but shoot, this kind of stuff just kills me. 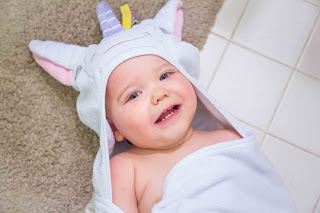 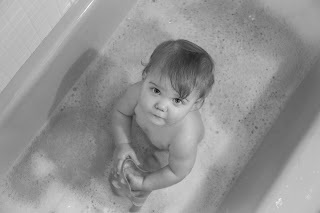 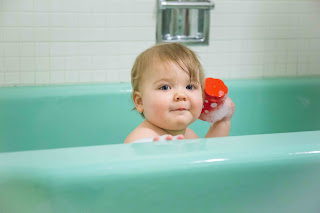 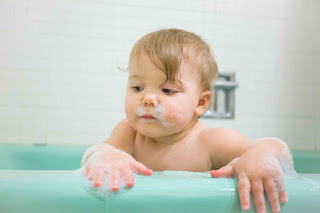 Patrick had a sleepover at NeeNee's on Saturday night so Ro and I had some girl time aka I grabbed my new camera and snapped some pics of her solo-ing bath time.  Again, BIASED, but she's just the cutest!  And her poor bangs are so long now they get in her eyes!  If she has her antenna up or a clip it's fine (but that's assuming she doesn't yank it out!) otherwise they're in her eyes.  I can't bring myself to cut it just yet! 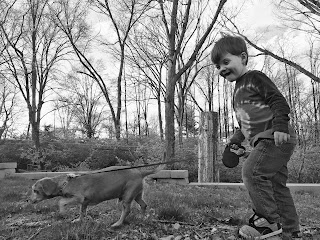 Patrick's new obsession whenever we get home from being out and about is "I walk Scooter!!!" and he waits for me to go in, get Scooter (and simultaneously set Rosie down), and then bring Scooter out to the car and get him out so he can walk him around the house to go potty.  He loves doing this and I love that he does too -- one less chore for yours truly to try and tackle with (usually) 2 kids and a dog home by myself! 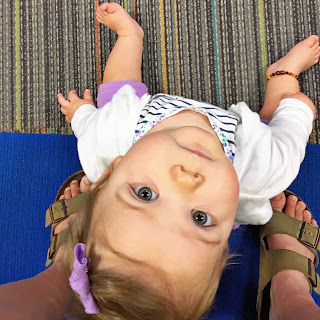 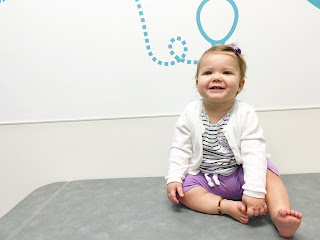 Ro had another check-up with the hand surgeon for her finger on Monday.  I was really hoping this was going to be our last visit, but, alas, we have to go back in another month.  HOPEFULLY that one will be our last and girlfriend's fingernail will start growing...cause I don't want to think what will have to happen if it doesn't!  So!  Here's hoping that when we go back in May her nail is growing strong and we can bid adieu to our lovely doc at Children's Hospital. 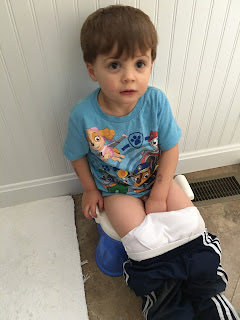 Potty training update!  I thought about doing an entirely separate "Potty Training Diaries" post but honestly not much has changed since the last time I posted so I figured I'd just lop it into this update post.  Patrick is doing AMAZING.  Like I want to shout it from the rooftops.  It's been almost 2 weeks since he decided he didn't want diapers anymore and has had ZERO pee accidents.  He's had one #2 accident at the playplace about a week and a half ago, and that's it.  He does say sometimes "I have a little skid mark" (which is hilarious and only true about 10% of the time. haha!) and frequently says, "My butt hurts!!" which means he's gotta poo, but no accidents since!  Pooping (TMI, sorry!) is harder for him and he's not 100% comfortable with the whole process yet and it takes several "My butt hurts!" trips to the potty before he actually gets anything out, but he's doing really well otherwise.  He does like getting to pick a toy when he goes #2 out of the toy box and only rarely now asks for a marshmelly when he goes #1.  He's still in dipes (for probably the foreseeable future) at nap and bedtime, and is hit or miss (about 50% of the time) waking up dry then...but I'm not pushing that yet.  I am just so proud of him for doing this all on his own! 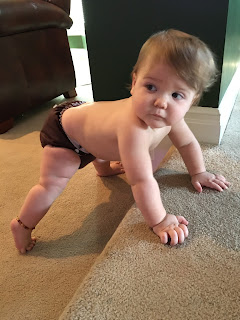 Ro has been doing this all 4s thing for a week now so I think she's SO CLOSE to being able to pull herself up to standing!  She still hasn't conquered steps (which is hard since we only have some going to the basement) but this 4s thing is a huge improvement to where she was just a week or so ago with slooooooowllllyyy crawling. 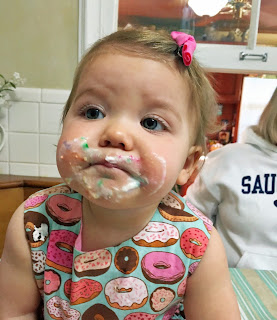 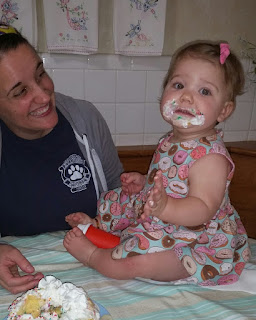 Ro had her final birthday shindig last night at my mom's with the extended family.  We tried another cake smash attempt and nope, she wasn't having it AGAIN!  WHATTTT???!  I really think the crowd of people and singing freaked her the heck out.  Ekkk.  Oh well, once she calmed down a bit I half fed her the cake and she really seemed to enjoy it that way, so kinda a win, huh?!!

She got some really great prezzies and a lot of new toys and clothes!  Girlfriend should be nice and set for the summer! 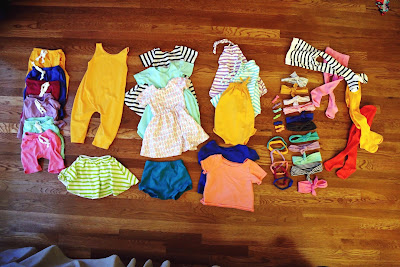 Andddddd speaking of clothes, the pic above is our June & January stash...OHH EMM GEE.  We have so much!  But it is our favorite favorite favorite clothing store for little girls (and Patrick does enjoy the lounge shorts as well from them!  --they just have more girly options which I'm totally okay with!) and we are kinda obsessed.  However, my OCD is on overdrive that this picture is inaccurate in that I forgot a charcoal dress and a cardigan in Ro's closet so it isn't our COMPLETE J&J stash.  I'm probably gonna have to snap another pic soon of the completed stash so my OCD calms the heck down.

Whew!  That's about it!  We've been busy busy busy and although I'm hoping it tones down a bit I think the busyness is here to stay until summer comes.  With my photo shoot schedule and what not now taking up a part of our weekends too, I think we'll really be on overdrive.  But that's okay, I love me some photo shoots and taking pictures!  That's about all I've got for this Wednesday morning...have a good one friends!
Email Post
Labels: busy family family fun finger lately party Patrick potty potty training Rosie update what's happening