I did this same kind of post for Patrick's 1st birthday, so I figured I'd do the same for Ro Ro and go back and recap what she did for her first birthday!  Her big party is this weekend, so that'll be another post entirely in itself, but I figured I'd do a quick little recap of the fun she had today!

First off, I documented her day with #rosakathleenturns1 on Instagram (used a similar hashtag for Patrick's 1st and 2nd birthday as well...and will probably continue to do so for future birthdays!)

I took the day off so we could have some family time with all 4 of us before Mike went to work at 3pm.  Otherwise, had I worked we wouldn't have all been able to be together! 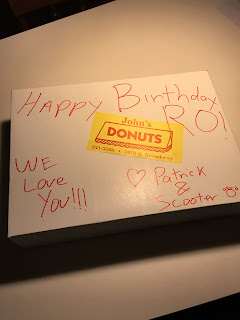 We kept the tradition alive with birthday donuts for Rosie.  We always get donuts for whomever's birthday it is, and it was no exception that Ro was just turning one, she was getting donuts! 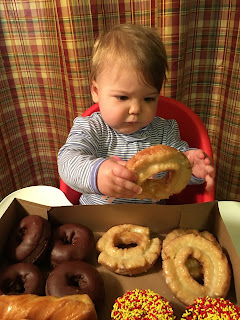 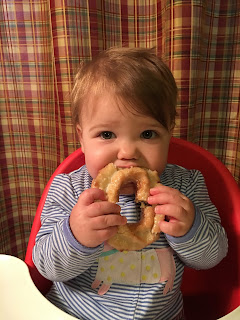 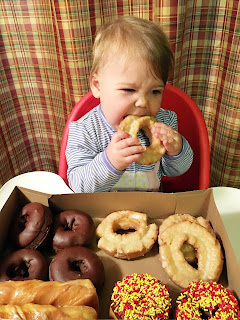 To say she loved her donuts would be an understatement: she DEVOURED them.  Seriously, that buttermilk one stood no chance and about 3 minutes later it was gone.  Girlfriend loves her donuts!  Good thing that's the theme for her birthday party on Saturday!

We also FaceTimed with my parents (who are on vacay until tomorrow in a tropical destination. LUCKY DUCKS.) so they could tell Ro happy birthday too.  They did send her an awesome message in the sand underneath palm trees later in the day too which was super awesome. 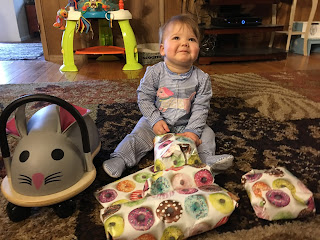 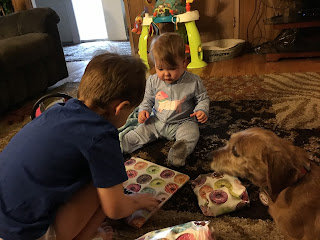 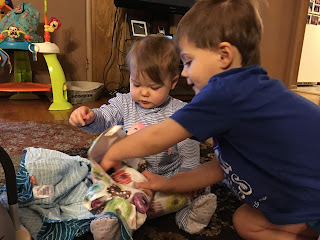 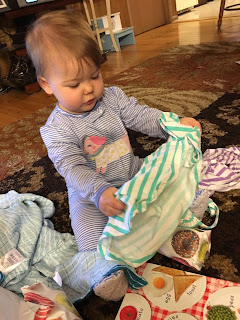 We then let Ro tear into her presents...or should I say Patrick.  Ha!  He was more than willing to help Rosie open all of her gifts, and even spending the majority of our time at home the rest of the day riding on "ABC Mouse" (thank you Nickelodeon commercial for that name) -- her new mouse scooter she got. 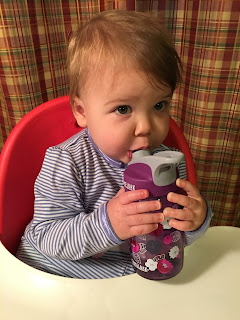 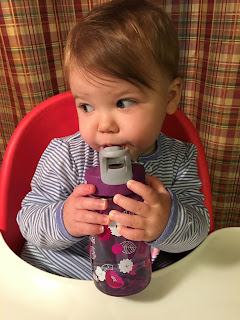 Ro got a few new outfits and shirts, a mouse scooter, a giant word book, and probably her favorite gift, a new Camelbak water bottle that she's mastered drinking out of already.  She's been eyeballin' Patrick's lately and so we thought she could use her own.  We were right: she loves it! 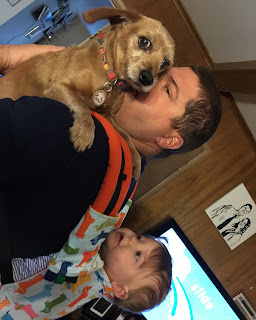 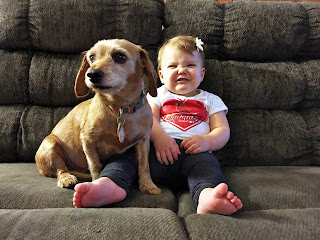 After presents and breakfast we hung out a bit (Ro got to ride in the Tula for a while and Scoots was way jealous of her riding in "his" Tula, you know, cause his picture is on it) before heading out to lunch at Chick-Fil-A with Lizzy and Papa Rick. 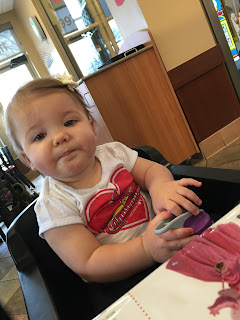 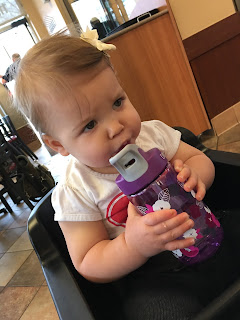 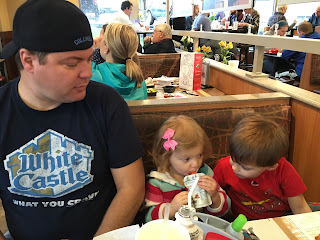 Ro sure loved on her water bottle allllllllll lunchtime at Chick-Fil-A, and Patrick and Lizzy loved sitting with Mike and playing in the play place.

We then headed home for siestas, and I used that time to get the basement semi-organized before I clean down there later this week to prep for Ro's big party on Saturday. 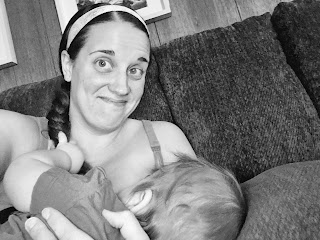 Once everyone got up from their naps Rosie and I snapped a selfie to commemorate making it one year breastfeeding!  Woot!  I'm still so excited about that!!!  What a milestone!!

We then grabbed our stuff and headed up to the Pond to meet Kate and Goose for dinner -- we ordered IMOS and Kate got cupcakes so we could end Ro's birthday on a high note. 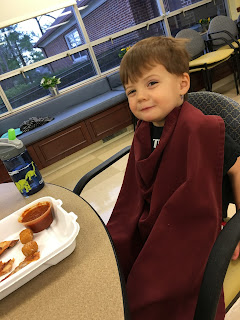 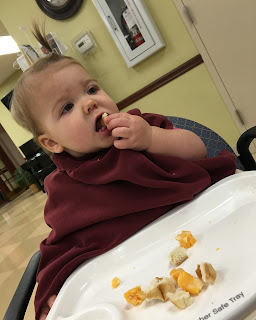 So the kiddos devoured their IMOS -- like I don't even want to tell you how much food we ordered and just had a few chicken wings left over.  I guess we all were hungry!  Haha! 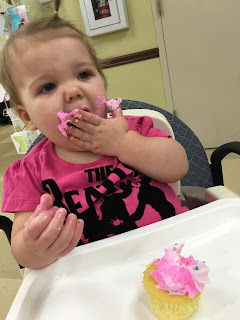 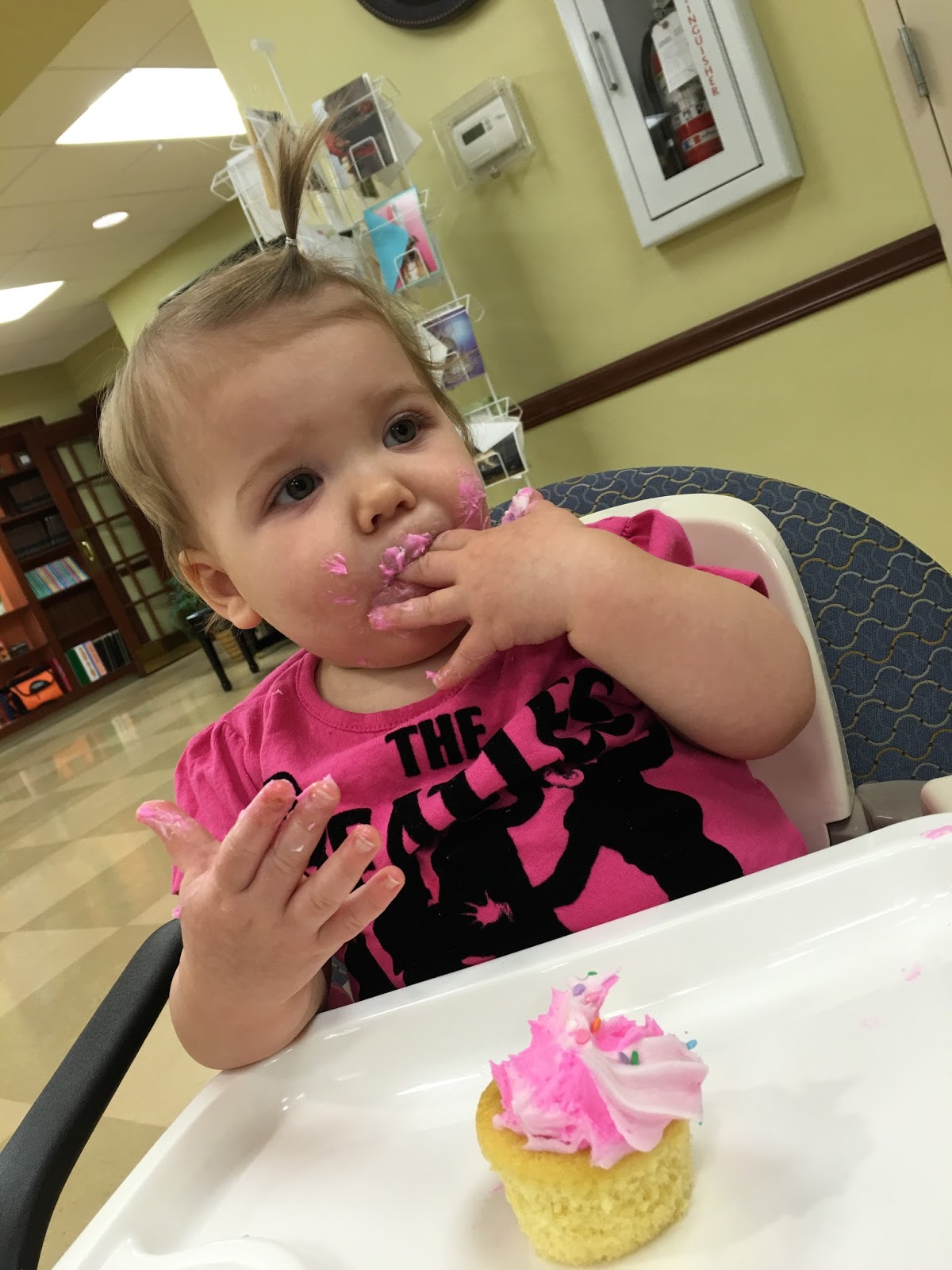 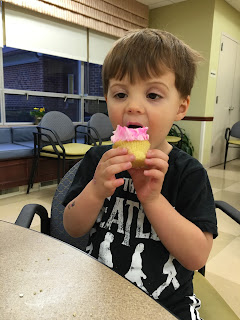 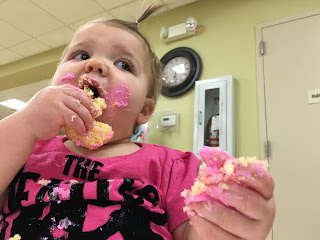 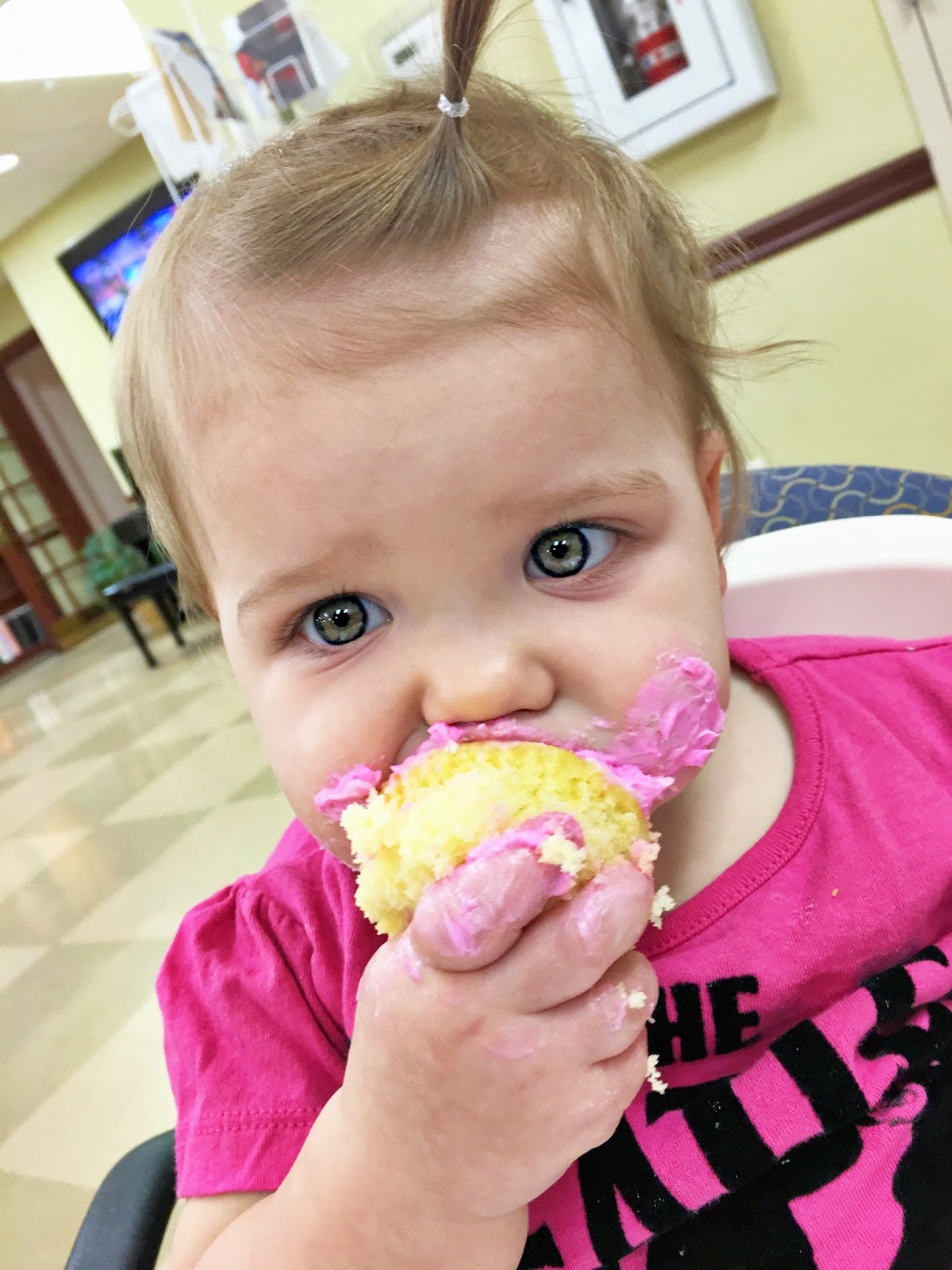 The kids both thoroughly enjoyed their cupcakes -- Rosie more than Patrick.  I'm not kidding, in FIVE MINUTES she had her entire cupcake devoured!  You go girl.  I'll be curious to see how much she weighs tomorrow at her one year check up with everything she ate today!


I think Rosie is going to be very practiced in devouring her custom donut cake on Saturday at her party!

We hung with Kate and Goose for a little bit longer (and Patrick successfully used a public bathroom for the first time. WOOT!!) before heading home for baths and bed. 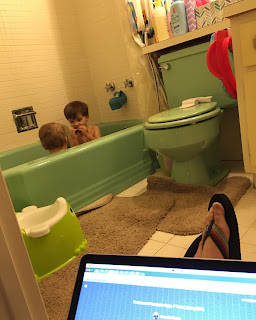 Since I took off today I multitasked at bathtime responding to some student emails while supervising the minions in the tub.  Both kids passed out about 5 minutes after their heads hit their beds, and mama bear here is about to follow suit!

Rosie had a wonderful first birthday and it was so great we were able to spend a good chunk of the day together as a family.  I still cannot believe she is ONE -- the past year has literally flown by faster than any other year in my life and I feel like it's only gonna go faster.  If it does, I'm holding on, and trying to savor every single second of this crazy ride called life!  And, of course, blogging the heck outta it along the way. 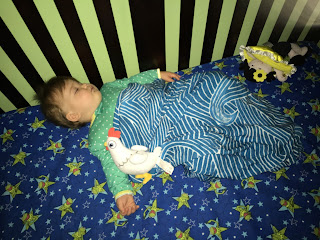