I wanted to wait a smidgen before posting another update (following entry 1) about Patrick's potty training diaries.  So!  Here I am again about to give you all another probably TMI update about my kid's bathroom habits.  Exciting, isn't it?!! 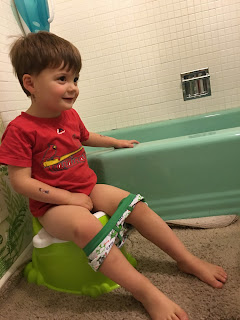 We're a week into Patrick declaring he didn't want to wear diapers anymore, and, I think I can safely say he's nearly 100% potty trained.  He hasn't had a #1 accident in a week, and only had one other accident (a #2) on Monday (and was pretty devastated about it, so hoping it won't happen again!). 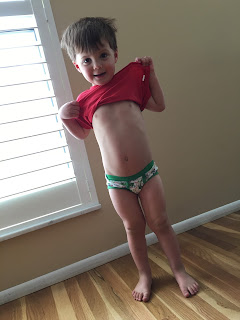 He gets excited about picking out his undies (or learning pants) and doesn't ask for a diaper on anymore--he actually gets noticeably upset when we tell him he's gotta still wear one for nap and bedtime.  So yes, he's not completely potty trained, since he's still wearing diapers when he sleeps, but he does wake up about 50% of the time dry (usually always dry after nap, and not nearly as wet as he formerly pre-potty training way when he got up in the morning).  However, our goal right now is 100% during the awake hours, and he is SO CLOSE to being there! 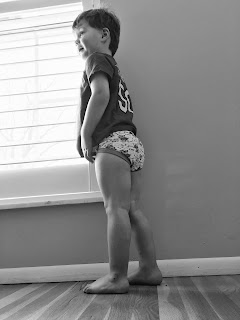 I fully expect some accidents down the road, but thus far it has gone soooooo well for him and his incentives of a new toy for #2 and a 'marshmelly' for #1 seem to still be holding his attention.  And actually, sometimes he says he's got to go (yep, still telling us!  We rarely ask him he usually tells us when he's gotta go!), goes, and then doesn't even ask for a mashmelly!

Anyways, short and sweet update for this second installment of the potty training diaries (I'm SURE there will be more!), but mama bear here is heaving a sigh of relief because 1. less diapers to wash 2. undies look so adorable on him and make him look like such a big boy 3. he potty trained HIMSELF with almost no effort on our part 4. (MOST IMPORTANT!) he can start preschool in August without worrying about forcing potty training on him!