Whew!  What a weekend!  I'm still kinda coming off of my high from shooting baby Wesley's birth last week, and I had 2 other shoots this weekend (including Laura's family/maternity pics!) and I pulled my camera out no less than twenty times this weekend it felt like to snap pics of my burritos because 1. I'm obsessed with my new camera and lens 2. the lighting!  So pretty!  So I apologize but this post is kinda a photo dump so bear with me. 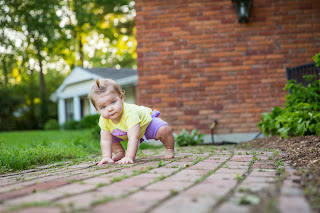 Like I said, my new lens came and it is SHARP.  Like SO SHARP.  I thought my 85mm was sharp (and it is!) but this one blows it out of the water.  It's a 24-70mm f/2.8 Canon lens and I may never ever shoot with anything else ever again.  It's freaking amazing and my new baby and I probably overdid it this weekend with taking and sharing pics but whatevs, I don't care.  My kids are gonna have the best documented childhoods out there. 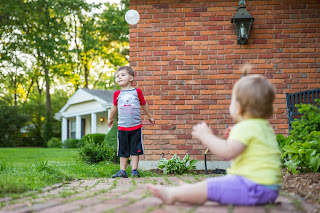 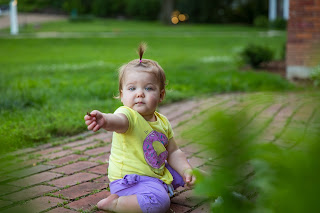 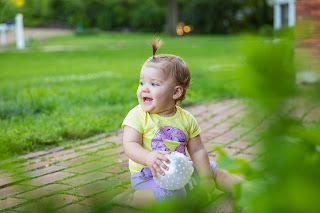 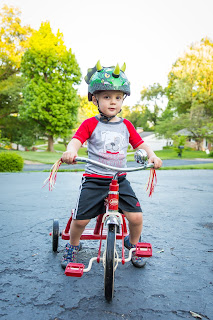 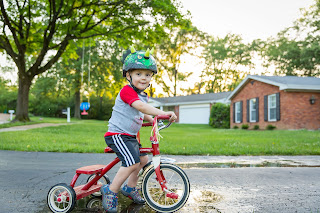 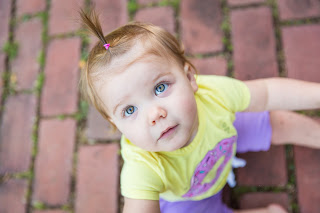 The lighting the past several nights has been ON POINT and our front yard is a great little spot to capture the sun going down behind the trees and having the kids playing in their natural habitats.  Now that the front of our house doesn't look like it's from the 1970s with the huge hoosier bushes taking over, I love capturing part/all of it in my snaps out front! 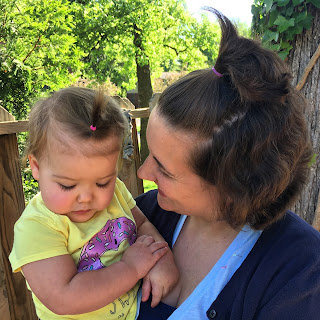 Since I got my hair cut I have realized that I can style it a few ways, one of them being like Ro with an antenna (although mine is not nearly as pointy as hers)...although I'm not sure how thrilled she was having mama have the same hairstyle as she did. 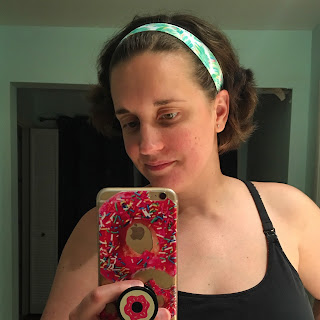 Speaking of hair, I was SO WORRIED that once I chopped 18+ inches off of my head I'd no longer have a need or use for my beloved Brady Bands.  WRONG!  So wrong I was!  I can now toss a headband in with my crazy wavy hair behind me and be good to go.  I love it so.  And, shameless pitch, but you can always take 15% off your entire order at bradybands.com with the code AM15 if you wanna order any headbands :) 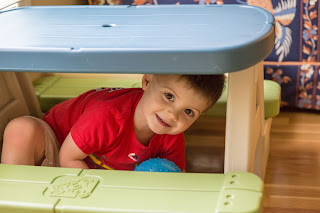 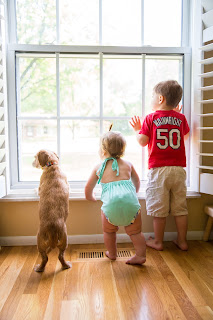 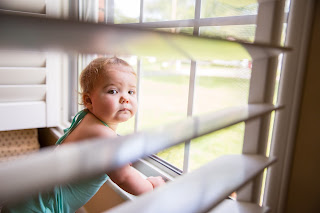 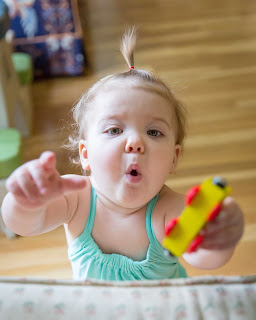 Again!  More snapping with my camera and lens!  I can't help it!  But how cute are my subjects?!  And them waiting for the mailtruck to come looking out the window is my new favorite pic.  So cute.  Ro is FINALLY starting to pull herself up (not all the time, but more than she ever has been!) so I've been trying to capture that as she continues to do it more and more.  I'm sure she'll be walking in no time!  GAHHHH!  Time, slow down!  Or give me another baby!  Haha! 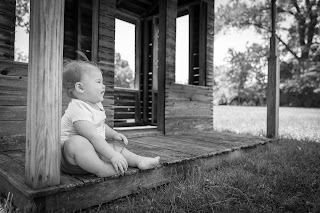 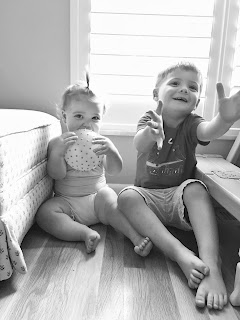 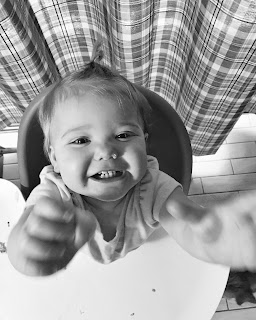 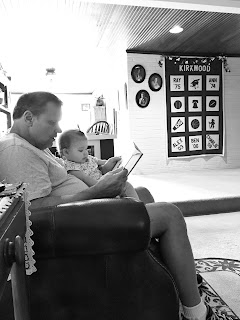 My 366 project on Instagram is still going strong and I haven't missed a day yet (woot!), and I'm really loving the challenge still of posting an in the moment black and white pic each day.  Here are a few of my recent b&w snaps I've taken...although the last one wasn't for my 366 project I included it cause it's 1. black and white 2. adorable. 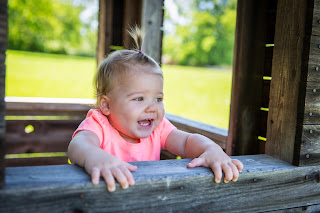 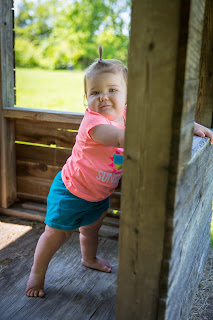 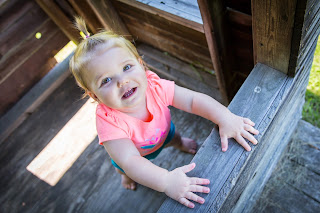 More camera snaps.  These I took after my session earlier today at the Mooneys house...it was so pretty out I whisked Ro up and took her outside and snapped some pics of her, cause why not?! 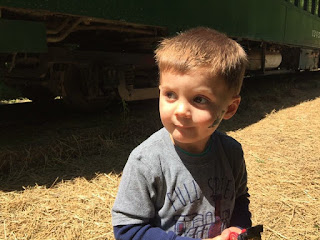 You may have noticed this post seemed very Rosie heavy and lacking of Patrick...well, he's been at his vacation home since Friday (comes back tomorrow...I miss him so!) with his KiKi -- they had a super special weekend planned where he got to go on a real steam train ride and I'm sure has been spoiled to no end while he's been on vacation being an only child.  Thank God for social media and picture messaging and FaceTime so we can see all of the awesome things he's been up to!  He's gonna have such a fun summer down there with her (cause he WILL ask every.single.day. to go to KiKi's lake), I just know it! 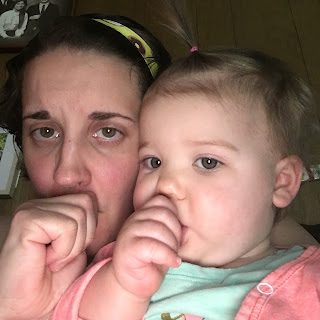 Ha!  Reliving my youth and mocking Ro with some thumb-sucking.  Both of my kids are avid thumb suckers and I don't know where they got it from.  KIDDING.  Duh, it's me.  I sucked my thumb till I was like 8 I think! 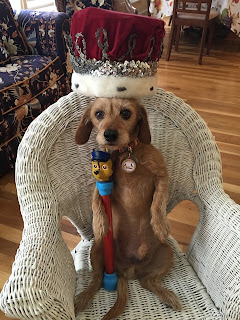 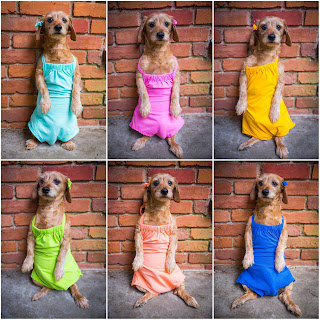 Finally, I'll end this post with a few funny snaps of Scoots -- first emulating Mister Gary from Them Yo People (which is an awesome show, if you haven't watched it!  --You need to be STL local though...it's a paid programming local show...it's THAT good :) and modeling all of Ro's playsuits from June & January.  Seriously, we have the MOST COOPERATIVE dog ever.  PS - if you're not following Scoots blog, you're missing out.  I'm biased, I know, but it's pretty funny.

Alrighty, that's about all I've got for this Sunday evening...I have one week left of regular class, finals, some meetings, then BOOM!  Out for summer!  I'm so excited!  Have a great week friends!