No, it was incredibly hard.  Next to Monday, it may have been the hardest day of my life. 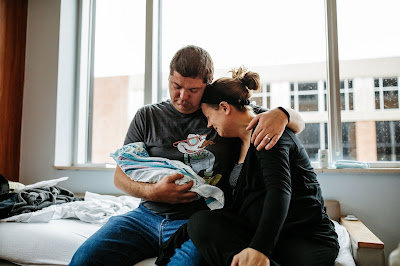 We got discharged from the hospital today, but, unlike my last three post-c-section discharges, we didn't have a baby coming home with us.

No carseat to get fit tested by the nurses, no baby bag of clothes and swaddles and diapers and all of the other goodies you snag with you from the bassinet cart...none of that.  Instead, we left with a memorial box of our little guy's hand and footprints, an outfit, hat, and blanket.

Clark was there with us our entire stay...although we did not see him again until today.  We had him for quite a while on Monday, and said see you later for the first time Monday night, but we knew he'd be right there by us, not going anywhere until we did.  We took comfort in that, knowing he was still there at the hospital, as were we.

However, the day came that it was time to go home -- a day earlier than my usual 5-day stays, but it was time: I missed my bed and my big kids and Scooter and just wanted to be home.  But it was also terribly hard, because going home meant saying our final see you later to Clark man.

We had to wait a good chunk of the day for my doc to come in and give me the all clear -- which he did a bit after lunchtime.  Everything looked like it was healing up well with me, my meds were ordered, post c-section instructions given (although by now I feel like I know them by heart), and he said we were free to go or stay another night if we wanted.  We knew we wanted to go home but were dreading leaving our little guy for the final time -- that was something that, even delaying our discharge a day, would still have been incredibly hard regardless.

We asked our nurse to go get our little Clark so we could snuggle him and kiss him and love on him one final time before we had to go.  While she went and got him for us, I had Mike get my camera out -- something I am SO GLAD I decided to bring.  We did snap some pics of the big kids in their costumes when they came up to visit on Halloween, but other than that it had remained in my bag.

As soon as our nurse (which, complete side note: all of the nurses and docs were just absolutely AMAZING during our stay.  I cannot say enough great things about them and just want to bear hug all of them for the wonderful care and attention they gave us and our little fella.) brought Clark in both Mike and I lost it -- I feel like I had been holding it together the past several days with visitors and phone calls and text messages and social media comments, but as soon as I saw my littlest man the tears started flowing...and honestly, as I sit here nearing 10pm the same night, they really haven't stopped.  I have been an emotional wreck since we had to say our see ya laters to Clark and the littlest things have just caused the floods in my eyes to flow.  And I know -- I KNOW -- it is okay to cry.  It is okay to be sad and show emotion now and in the days, weeks, months, even years to come.  But it still is just such an overpowering feeling (or feelings, I guess) that has encompassed me these past several weeks and definitely past couple of days it just feels crippling sometimes.

But I will be okay.  WE will be okay.  And as difficult as today was, it showed me that.  The continued outpouring of love and support from our friends and family and community (many of them internet friends I've never met, but if you're no stranger around here know how much I LOVE them) has lifted us up and helped us SO much, even on the most emotion-filled days.  We are sharing Clark's story because he is our son and we are so so so proud to be his parents.  I want his legacy to live on and on, and I've decided to pump and donate in his honor.  Pumping is something that I am extremely blessed with that comes so easily and plentiful to me, and I cannot think of a better way to celebrate our Clark is by sharing his mama's milk with others.  I know he's smiling down on us and those babies who are getting that liquid gold lovin'.

So Clark man, our littlest fella -- oh how incredibly hard it was to say see ya later -- NEVER goodbye.  Always see you later, because we WILL see him again someday.  And that someday may not be soon, but we hold tight to our faith and knowing we will be reunited with our little guy one day.  So always, see you later.

And Clark is ours.  I realize he doesn't look like a fresh newborn baby -- he was a big boy at just shy of 22 weeks gestation -- but he is OURS.  And I am proud to call him my son and so so so thankful he chose Mike and I to be his parents.  So I am sharing his pictures here with you -- because we love them; these are our little boy with his cute button nose and adorable little lips and teeny tiny fingers with the cutest little nails. 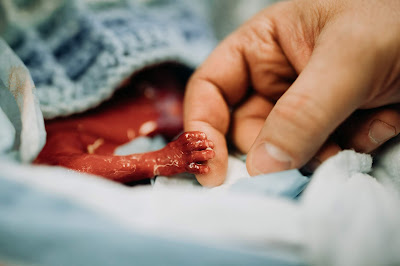 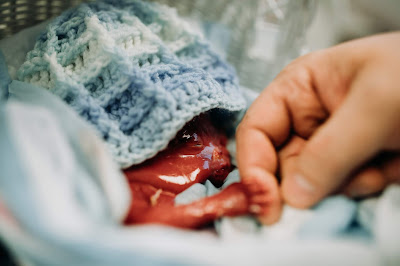 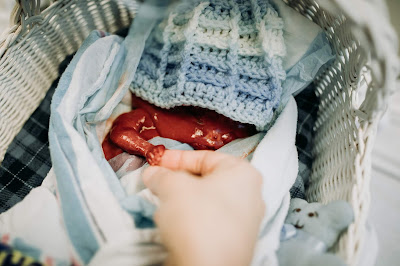 One thing that has been such a rock for us has been Clark's TinySuperheroes cape.  It sat on my bed my entire stay and graced his little basket during our last snuggles and time with him.  I will hold onto and cherish it forever and ever, because it is his. 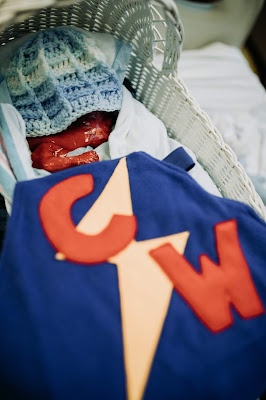 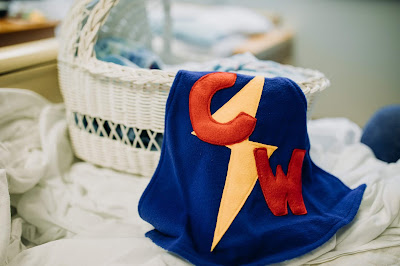 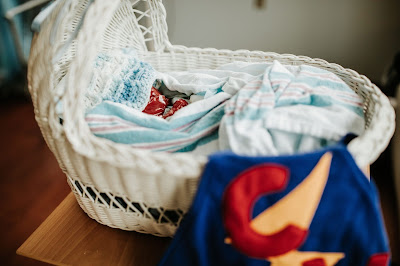 Our little Clark William.  Our superhero who will watch over us and his big brother and sisters forever and ever.  I'll probably still snuggle with his cape and hang it by our bed just because of how much strength I feel like it did bring me in the hospital having it there.

Mike and I both took turns snuggling our little man and talking to him and loving up on him the best way we knew how to do.  And, even though it was incredibly hard, we both took turns snapping the other one doing this...because photos are EVERYTHING to us right now.  We hold Clark in our memories and hearts always, but having these pictures to visually see is just priceless.  So yes, lots of emotions shed and shown, but that is us.  That is our raw and real love in our final moments with our little guy. 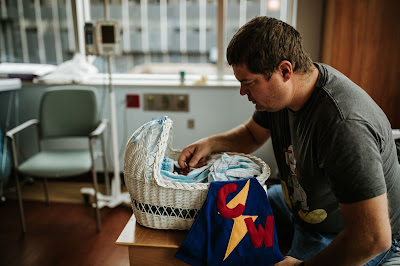 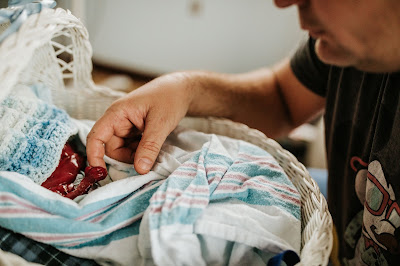 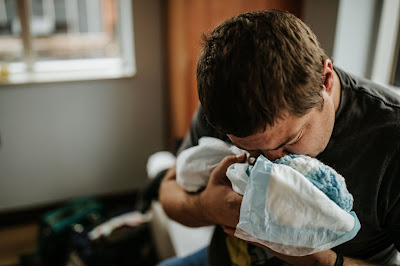 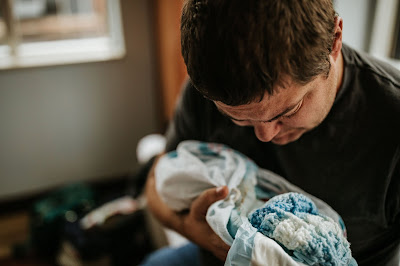 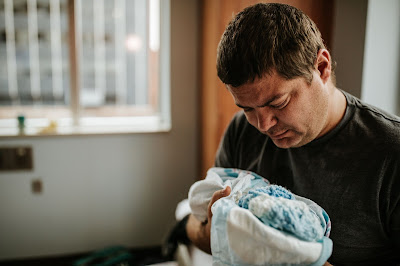 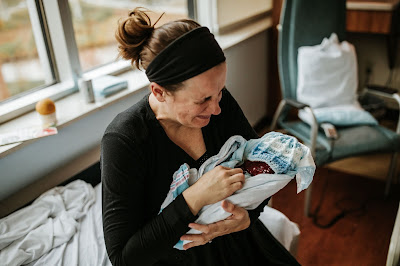 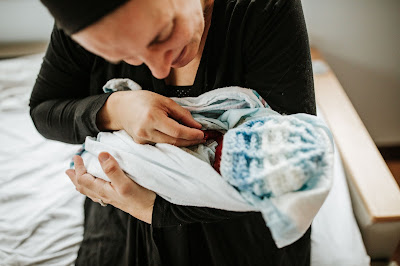 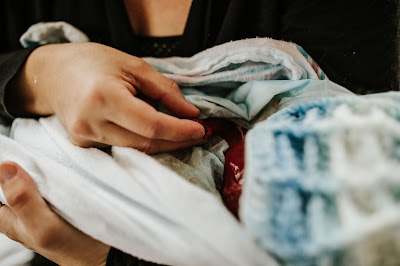 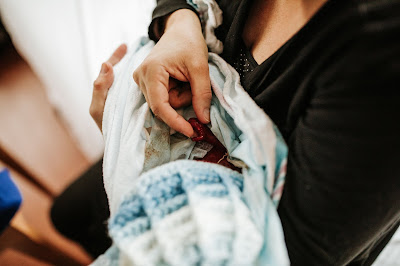 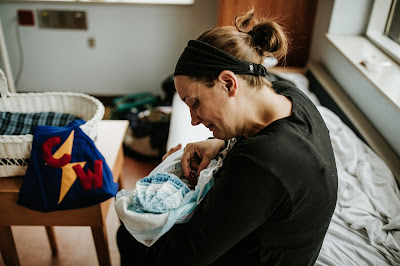 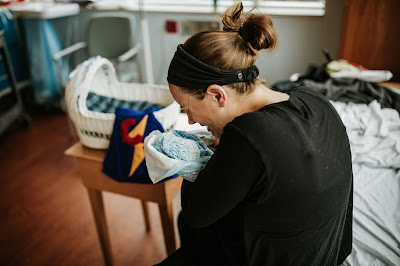 As hard as that was, it also felt so incredibly good to hold him and look at him and talk to him and tell him how proud we were to be his parents.  We couldn't stop talking to him and didn't want our time with him to end.

We knew we wanted a few last pictures together with our Clark, and as easy as it would have been to call the nurse in to snap these, I just said I'd do it.  I set my camera up, wifi-ed my phone as a remote, set the timer, and let it snap away and capture us...just the three of us before we had to say our final see you laters. 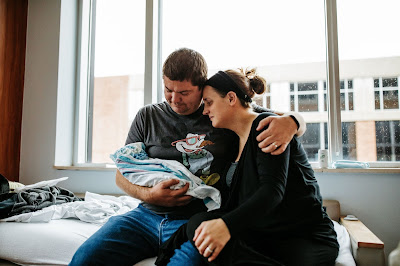 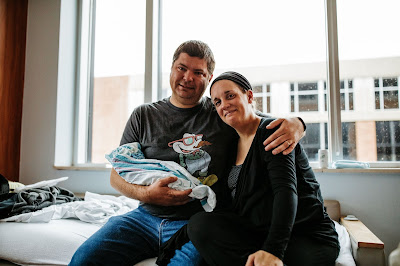 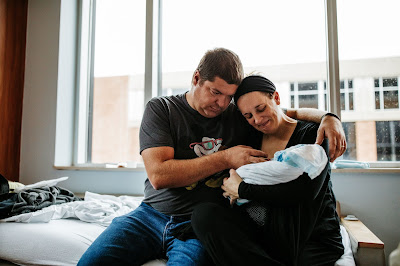 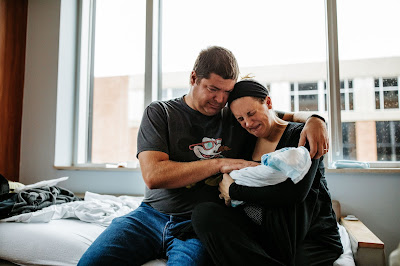 The display of love and grief and everything in between in these pics just echoes what we were feeling today.  Literally every flood of emotions we felt and were just consumed by.  It was overwhelming -- having such an incredibly deep sense of love for someone and realizing you'll never get to watch them grow up, take their first steps, fight with their older siblings, snuggle with you on the couch before bedtime, walk them to kindergarten -- none of that.  You are just overcome by grief and longing for experiences you'll never get to have with this little one you are snuggling so hard in your last minutes with him.

You are also overcome with a sense of love and peace -- that he's never known hurt or pain or hate or anything that seems to plague our world today -- he has only known love.  And will only know love, as we continue to celebrate and love on him in spirit now that we can't snuggle him anymore.  And as tough as it is to send your baby away you take solace in knowing that it's just for now, just a see you later, that you will see him again and be able to snuggle him and love on him again one day when we're reunited in Heaven...a place that Clark has already gone to and will continue to watch over us until we can be reunited with him again.

So as difficult as today was, it was also incredibly peaceful.  And that is where we are finding strength to keep going -- because despite how hard the past few days (and heck, several weeks) have been, we will be okay.  We are going to keep talking about and celebrating our little guy and honoring him and being inspired by him to do great things.  He is going to watch over us and be our motivation to keep going everyday and do good -- because we know our Clark deserves that -- he deserves the best parents and doing the best that we can in anything we do every single day.  So as challenging and emotion-filled as the days and weeks and months and years will be to come, we will embrace those challenges and use them to keep honoring our little guy until one day we are reunited with him again.  And that, knowing that gives us peace and hope for our future.
Email Post
Labels: clark grief hello and see you later our little C see you later