There Is Good Out There.

When we first found out about Clark's prognosis, I asked Mike if he thought I should pump and donate.  At first, my feelings were like NOPE NOPE NOPE but the more I thought about it, and more I talked with Mike (who reminded me how easy it comes to me...which I know is a huge blessing in itself since so many struggle with supply and pumping) I KNEW I wanted to pump.

Unlike most of this, pumping would put me in control: I could decide to do it, for how long, and make the decision when I wanted to stop.  Since so much with Clark's life was out of my control, which as his mama and his carrier was so hard to stomach and swallow, I wanted to do this because it was something I could control.  Plus, I could not think of a better way to honor my sweet boy than donating the mama's milk that he wasn't going to be able to use to another little one who would.

After his arrival, I asked my nurse to bring a pump in.  I think she was a bit taken aback -- not many stillbirth mamas choose to pump.  And I get it, at that point I wasn't too thrilled about having to sit up and hold flanges on my boobs while my incision site was screaming at me from below.  But I knew the pain, the struggle, the inconveniences that come along with pumping would be worth it, so I pressed on.  My first pump session on Tuesday evening, about 24 hours after Clark was born, I got literally drops.  DROPS.  Nothing even worth saving; I don't even think they'd be able to be sucked up by a syringe.

On Wednesday I pumped again and got this... 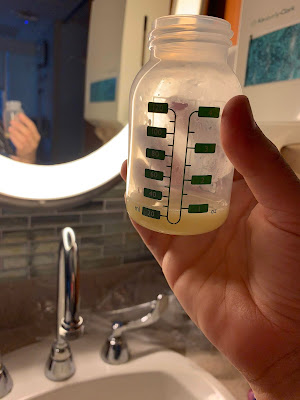 1 whole ounce of beautiful golden colostrum.  Okay.  I can do this.  I told myself I would pump a few times a day, NEVER overnight (cause mama needs her sleep, and as much as I love donating, unless it's a baby screaming for my boob in the middle of the night, I refuse to wake up for a pump...made that tiring mistake after Patrick and learned my lesson not to do it again).

I know that strictly pumping is way different than pumping + nursing (or just nursing), because you're relying on a machine instead of a baby to stimulate your milk.  And I'm fully prepared to not get my extreme outputs like I've gotten in the past.  And that is OKAY.  Because any that I do get out, even if it's not my usual mass-output is perfect for Clark's mama's milk sendoff.

My next couple of pumps boosted 2, 3 and 4 ounce outputs!  This was making me happy -- my body was doing it, despite having a baby in Heaven and arriving about 17 weeks earlier than anticipated. 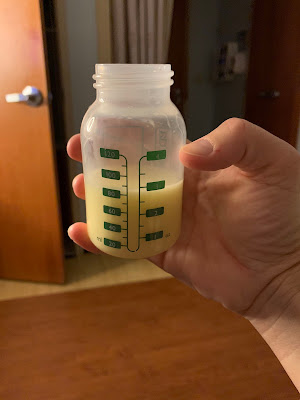 Two days after Clark was born I gave my insurance company a shout -- they provide a good stipend for a breast pump and/or supplies after delivery and I wanted to cash that in.  I had my eye on the brand new Willow Pump and realllllly wanted to try it.  I had several pumps at home that I love (Spectra S2 being the best!!) but I always like to still get a new pump with every baby to spread out the 'wear and tear' love and also test out any new pumps that may have come out.  I guess I consider myself a pumping aficionado.  I didn't NEED a new pump, but since they are suppose to cover it, I wanted to get one.

Welp, I was completely shattered when they told me I didn't qualify -- apparently stillborn baby = no baby = no medical reason to pump, so it's not covered.  I was so pissed and SO hurt.  I had already had some battles with covering some of our testing prior to Clark's passing with this company, and now this.  I was irate.  HOW COULD THEY DO THIS?!?  And I told them that; I said their policy sucked, it should have a loophole to cover requests like this (cause I cannot imagine they happen that often), and they just said sorry, that's our policy.  No medical reason because of a deceased baby means no pump coverage.

I WAS PISSED.  Pissed and so hurt.  Again, this is not my first 'coverage issue' with this company in the past couple weeks (and I'm prayingggggggg so hard it is my last, because I am so fearful of what they are not going to cover with the testing and such we have scheduled going forward) and I just was angry.  So what do I do when I'm angry?! I vent.  And sometimes it's here, sometimes it's on social media.  I feel like Instagram stories is just the perfect place for this...so I took to there to share. 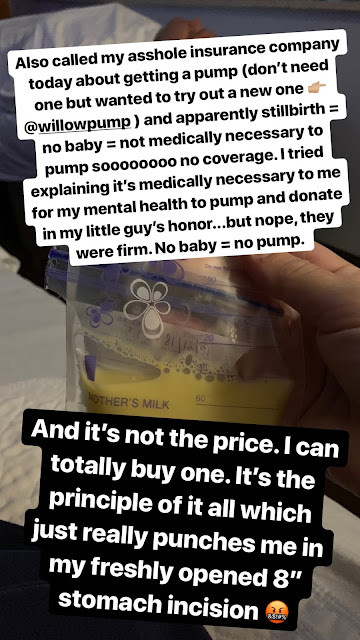 I posted ^^^^ that in my stories, basically summing up what I just wrote above.

Welp, it wasn't but maybe 30 minutes and my phone pinged that I got a direct message from @WillowPump (because I did tag them in my rant) saying they read my story and wanted to send me a pump FOR FREE.

I was completely speechless -- I could not believe it -- this pump I wanted SO BAD to try out to get some milk out to donate for our little guy, they reached out and offered to send me one.

There is good out there.

I was elated and promptly responded back that YESSSS! I WOULD ABSOLUTELY LOVE THAT!!

So we exchanged some details and they got a pump ordered for me.  I was so so so excited about it, because not only was this a new pump, but the completely wireless hands-free operation of it would be such a game changer for me and my go-go-go lifestyle I have (once I'm all recovered).

Fast-forwarded to today -- I got a UPS notification that my package was delivered, and low-and-behold, my pump came! GAHHHH! YAYYYYY! 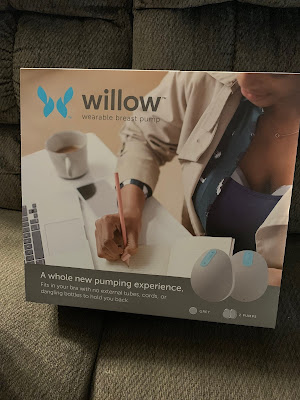 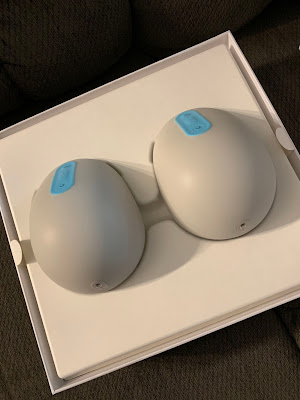 I tore open that package as fast as I could and quickly charged up the pumps, watched all of the tutorial videos, setup the app and synced the pumps up, cleaned the parts, and then looked at the clock and realized it was pump time already, so might as well take this guy for a test run! 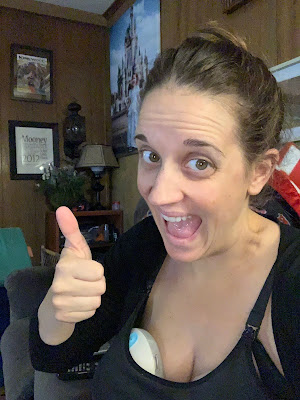 I'm completely in love with it just after one pump.  And yes, I'll be doing a full review on it in a couple weeks after I've gotten to use it much more than just once to give you a really thorough insightful review :)

It is weird not seeing the milk flow out and instead just seeing it on your app screen, but it was kinda cool watching the numbers go up on the screen too and seeing every detail show up on your phone!  I was able to get up and go heat up some soup for lunch and put a few dishes away allllll while pumping.  It was so freaking cool.  It didn't 'feel' like any pump I've used in the past either -- definitely didn't hurt, but it's hard to describe what it felt like but it definitely did its job because I got almost 5 ounces out! My most to date with this pumping period in my life. WOOT!

There is definitely a learning curve with it, but I think I'll get it fast.  I just really love it after the first use and cannot wait to use it more in the future. 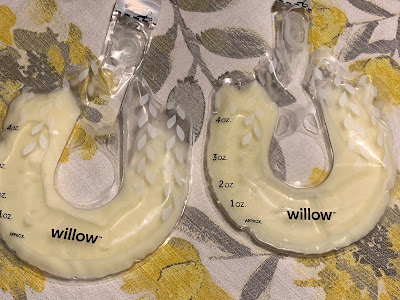 Overall, this was such a bright spot in a dark week for me.  I know some might think it's silly to get excited over a breast pump, but I really am.  It makes me happy that there are amazing companies out there like Willow offering to do this for people like me and provide me with a new pump to get milk out to donate in honor of our sweet Clark.  Truly, there is good out there and I'm using that as motivation to keep pressing on, keep celebrating our Clark, and just keep going.  Because we are going to be okay.
Email Post
Labels: breast milk breast pump clark donating honor our little C pumping