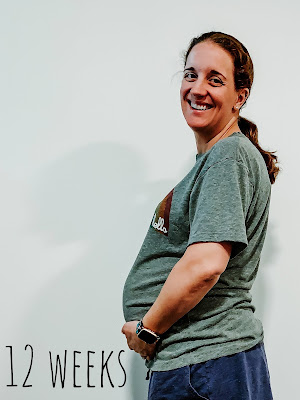 I cannot believe it. TWELVE WEEKS WE ARE TODAY!  Crazy!  And I waited to hit publish on this post till after my appointment and ultrasound with the high risk doc today so I could include those little tid bits.  Just a couple more weeks and BAM.  Second trimester.  This sure is FLYING BY.

So I've got another appointment on Thursday for another ultrasound with my OB, but the one I had today was with Dr. Paul, the high risk doc who took over once we got Clark's diagnosis.  It was good to see him again and catchup for a bit and chat about this 12 week little bean.

I'd be lying if I said I was SUPER ANXIOUS Sunday night and into Monday...I just had this huge fear that I was going to go into this 12 week appointment and ultrasound and they'd find hydrops.  Or something else wrong.  I'm not going to lie, I'm going to have this fear for every.single.appointment. I go to.  Ugh.  It sucks.  It's so hard...but I know come November it'll all be worth it.


But Monday came and it was WILD -- the ultrasound tech told me she about fell out of her chair when she saw my name on her chart this morning...that she read my story about Clark over the weekend and could NOT BELIEVE that I was coming in to have an ultrasound with her today!  Isn't that crazy?!  But also so awesome too.  Another little sign from our Clark man :) So we talked about that for a long time and she was literally the sweetest...then it was ultrasound time! I mean, this baby could not have looked any more perfect: measuring spot on at 12 weeks. Was moving around like crazy! (See video above) Plenty of fluid around baby but NONE inside of him/her. Tube thingy on the back of the neck looks perfect (it’s a marker for trisomies if it’s super thick) and brain is developing and has all of its parts it should at 12 weeks. Placenta is as far away from my cervix as possible, it’s posterior (back) and up top so she thinks hopefully within the next month I should feel movement!  Everything looks spot on and just as perfect as can be for 12 weeks.  SIGH OF RELIEF. 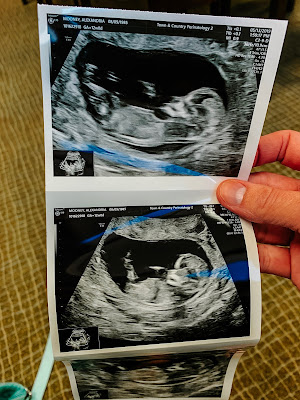 I then had to wait a bit to see Dr. Paul, the high risk OB who delivered Clark to chat with him about everything...but it was fine, I brought my laptop to get caught up on the Fresh 48 session I just did before I came in.

I spent 45 minutes catching up with Dr. Paul once he came in.  The nuchal thingy on the back of baby’s neck measured 1.2mm so perfect, which he said cystic hygromas, which Clark had TWO on his neck present earlier than this so if this baby was going to have them we’d see them so yay for that! Also, that number means low low low risk of any of the trisomies so yay for that too. He did say his concern is due date, said he really recommends c-section at 37/38 weeks (closer to 37 truly he said) just to play it safe with it being the 5th c-section for me. I told him I need zero convincing of that; I’ve seen too much bad stuff lately that if they think earlier is better, I’ll take it.  I will gladly take a NICU baby over no baby.  So overall, great appointment!  He wants to see me again in 10 weeks just to make sure everything looks good, but right now he thinks it’ll continue going well. I see Dr. Jen on Thursday so we’ll see what she says then too!  Overall, today went SO GOOD and I sighed a huge gigantic sigh of relief walking out of his office.

The kids were SO EXCITED to see the video and their little brother or sister (my guess is still on girl...HR was 171 today!!) today too!! 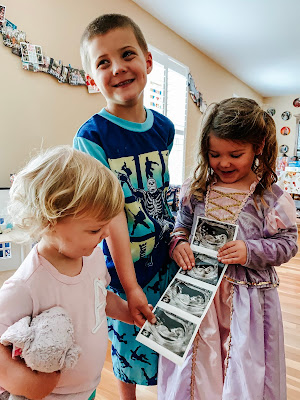 The past several days the nausea has seemingly come and it's been awful.  Friday night I thought I was going to barf on our way home from dinner and then even woke up in the middle of the night again feeling so pukey.  It hung around pretty much all day Saturday and into Sunday, so very much nausea and not an actual sickness.  GREATTTTT.  Just how I wanted to wrap up these final weeks of the first trimester.  Hopefully it's on its way out...cause I had been feeling pretty good, just super tired.  But trying to take comfort in the icky feeling that it means there's a healthy babe growing in there.  My fingers and toes are crossed so hard for that!

Here's #5 at 11w5d...best sound in the world! I love that you can hear my heartbeat (slower one) along with the baby's (faster one).


A few bump snappies from this week for ya... 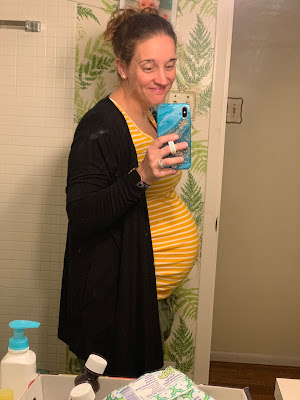 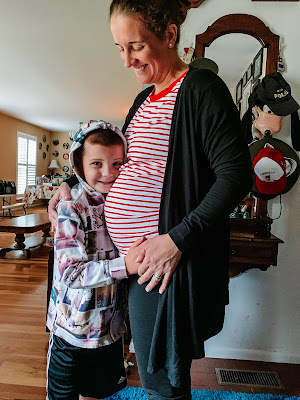 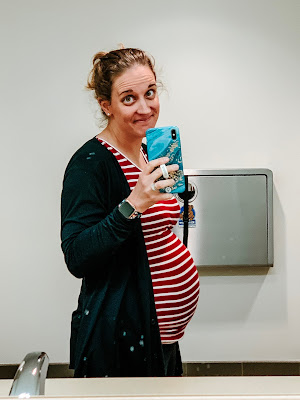 And here's my little predictions for this week along with the big kids' blog posts at 12 weeks linked up for ya.  Until week 13 friends...adios!