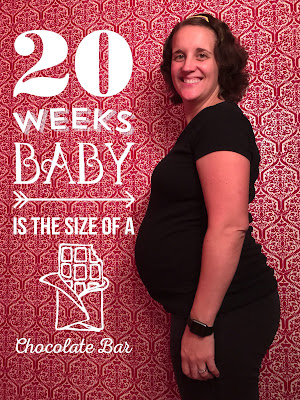 Anyways, my big ultrasound is tomorrow so I’m anxiously excited about that and hoping and praying the tech doesn’t slip up and tell/show us what #3 is.  Although I am convinced more than anything it’s another girl, I STILL want that true unknown surprise for his/her birthday in February.  I also set my c-section date too tomorrow so that’s also exciting.  That’s when it’ll really hit me.

So!  20 weeks!  What’s new?!  Well, late last week the holy hell of heartburn set in and I thought I was dying.  Tums became my best friend and I was popping them like candy.  I finally called my OB and she suggested I ditch my prescription acid reflux med and instead switch to Nexium.  I hauled it to Target with my $6 off coupon to pick up some and fortunately it has helped.  The heartburn isn't gone (still popping Tums now and again) but definitely not what it was earlier last week.  Phew. 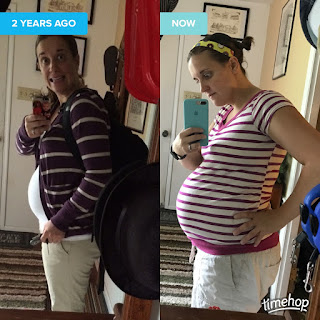 Fun little comparison pic from 2 years ago at 11ish weeks and 19 weeks this go round!  Obviously MUCH bigger (since I'm 2 months ahead!) this go round but still a neat shot to compare.  I think this kid is sitting sooooo much higher (maybe a contributor to my heartburn?!!) and totally am convinced it's another girl.  Still.  Haha. 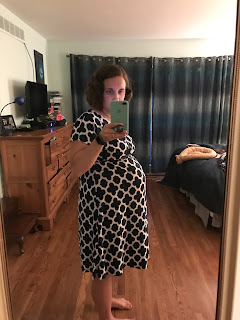 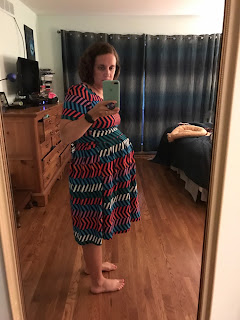 I have a few weddings to attend in October and I decided to test out my maternity dresses -- well, the top is a maternity dress, the bottom is a Lularoe Amelia dress that I totally am making work as a maternity dress cause POCKETS!  I love pockets.  Anyways, probably gonna wear these bad boys for any "formal" event between now and birth day.

So!  That's about it for 20 weeks!  I have my ultrasound tomorrow and I'm super excited about it (and again, hoping the tech doesn't spill any gender beans! Fingers crossed).  Until 21 weeks friends, adios!