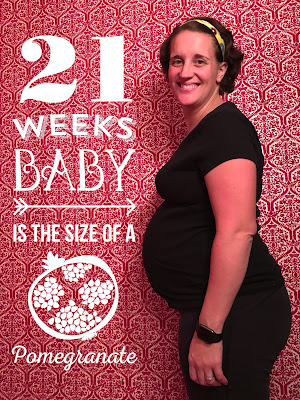 21 weeks today!  After the whirlwind of last week with the complete placenta previa deal-e-o and what not, I am being grateful for each and every day of this pregnancy, this little babe's teeny tiny flutters and kicks, and his/her continued growth!

Okay!  So!  What's new for week 21?!  Well, after my ultrasound and appointment last week, it's like this kid (or someone else!) was trying to tell me it was going to be alright, because the very next day I was feeling way more flutters and flat out kicks and punches than I've felt thus far!  So that has been a welcomed treat everyday since feeling those little movements.  I'm hoping in the next week or so Mike can actually start feeling them on my tummy too. 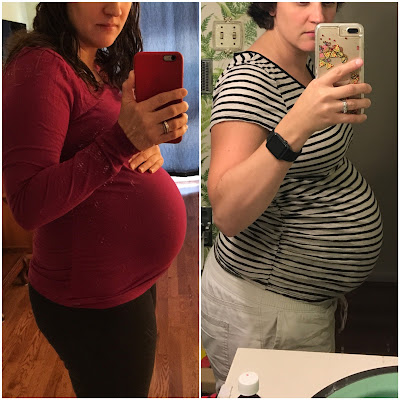 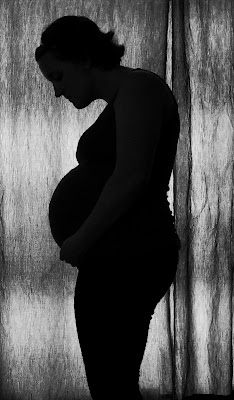 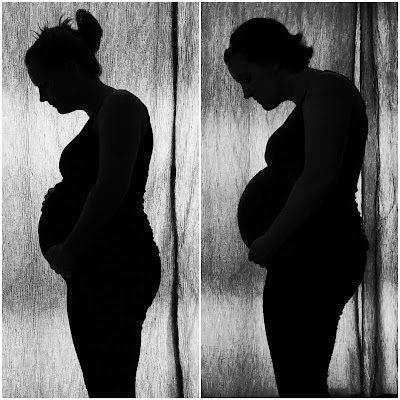 I did a silhouette snap at 21 weeks with Ro, and figured I'd do another one at 21 weeks this go'round too. HOLY TOLEDO LOOK AT HOW MUCH BIGGER I AM!!!!!!  Geez-louise!  I really do think I'm way bigger this go round and it feels like it is really starting to be apparent in my comparison snaps (which I'm sure you LOOOOOVE seeing, amiright?!!).

I still am like 99% convinced #3 is another little lady.  I really will be shocked if my doc pulls out a boy!  But there's just so many similarities to Ro's pregnancy and just mama-gut feelings I have that this is another little woman.  It seems that in 18 (or less!) weeks we will find out!

So I set my c-section date, which right now is January 31st.  So although this kid is due in February, he/she is most definitely coming in January!  Which is like FOUR MONTHS (OMG) away!  I cannot believe how fast it's going!  However, this date isn't set in stone (it is the latest day I'll deliver though) -- it could be a few weeks earlier than that -- it all depends on my placenta!  Which, I'm going to try not to dwell on that too much, but I really hope it gets a'movin' upwards sometime soon!

I've been feeling really good (minus some seasonal allergy stuff, but that's been my life for as long as I can remember in the fall so whatevs) and no more heartburn after that awful bout a couple weeks ago.  The miracle Nexium drug is working wonders, thankfully!  I have been super tired lately, but I think that's mostly from being up 4+ times a night to pee and then in between having to take Scoots out to pee cause he can never seem to get up when I am.  So much eyerollin' for him.  Plus with Mike working nights now and gone when we're all sleeping causes me to sleep lighter and not really sleep 'as well' as I once did.  I'm sure I'll get use to that though.

So!  That's about all I've got for a 21 week update!  It's finally feelin' like fall here and cooler which is nice because I've felt like a furnace the past several weeks.  Anyways, until week 22...adios friends!