I didn't really know what else to title this post, so!  Lucky you: you're getting an official medically-termed blog title.

So yesterday was my 20 week ultrasound and appointment.  I know I've been blogging about how this was coming up and I was excited about it but also worried that the tech was going to spill the gender beans and we weren't going to be surprised anymore.  Well, spoiler: she did not spill!  We turned away when she was down in that region checking on his/her feet that were all criss-crossed up by his/her crotch and we didn't see!  Although I'm even more convinced it's a girl now because, DRAMA people.  Why you ask?!! 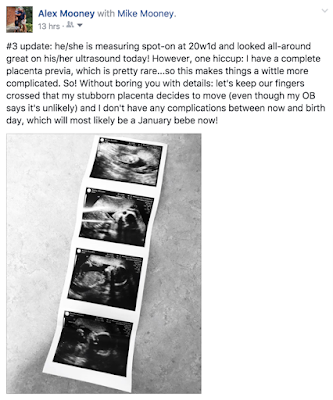 I posted ^^ that little update on Facebook and Instagram last night after our appointment.  I'm an open person.  Duh.  I have a blog which I pretty much spill my guts on with most everything, so I tend to sometimes let that fall over into my social media life as well.  And I do so mainly because I like the support network: I like people supporting me and our family -- good or bad -- and keeping us in their good thoughts and prayers.  Because, those do work!  And I'm hoping they work for #3's stubborn placenta! 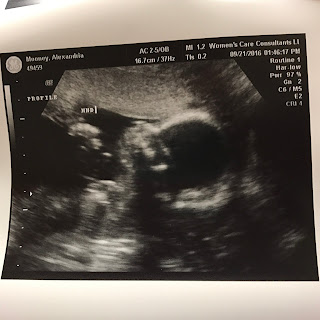 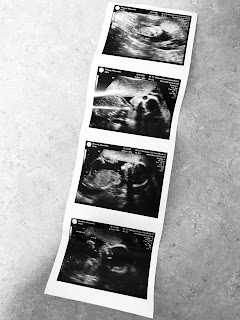 So, like in the post, the good news: baby looks great.  No issues with anatomy or anything with his/her scan.  Everything looks perfect, was measuring spot-on at 20w1d and in the 52nd percentile (which I think both other kids were right around the 50th percentile at their 20 week appointment!).  So that is the good news for #3!

Now, the not so good news, that I didn't really elaborate too much on in my Facebook update, other than saying that I have complete placenta previa, which basically means that the placenta is covering the entire opening of the cervix, and in my case also covering my previous 2 c-section uterine incisions.  Not great.  With most cases of placenta previa (which is actually very common, as most have a partial or marginal one) it moves and resolves itself.  However, with complete or total (what I have), there are only about 200,000 cases in the US each year so it's pretty rare...and it's also rare that it moves itself.  My OB doesn't think it's going to move (I hope she's wrong!) but says it definitely can...so my fingers are crossed for that!

I have been blogging about how I've been feeling tiny movements, but nothing like I felt at this point with Rosie.  I thought I had an anterior placenta -- which is funny I suspected something with the placenta being the cause.  Well, turns out I was right -- not that it's an anterior one (front), but that the placenta is causing the lack of movement I've been feeling.  The baby is almost resting on the placenta, and doing a lot of it's movements and kicks into the placenta, which is nice and thick and therefore probably preventing me from feeling a lot of the movements.

Anyways, so what does all of this mean?!  Well, a lot of monitoring and waiting to see what this placenta does.  The good part (and kind of shocking part to my OB) is that I haven't had ANY bleeding or spotting at all (I mean, if I'd have even seen a drop I'd have called ASAP) -- which is unique because most complete placenta previas are caught before 20 weeks because of bleeding.  So yay for that (and fingers crossed it continues to stay that way!).  However, this does move me to a higher risk pregnancy, which is new for me seeing as I've had two very textbook prior pregnancies.  I now get ultrasounds at every single appointment to check on the placenta location and baby's growth -- because delayed growth can be an issue with a complete placenta previa.  My OB is hopeful that my history of big babies bodes well and this kid will be another big one.  I have been put on complete pelvic rest, which is a sleuth of different things, mostly being no lifting (sorry Rosie!), no strenuous exercise, and some other things.  I'm very thankful that I'm not on bed rest (and hopefully will not be in the future!) but am determined to take it easy and hopefully keep this placenta from doing any wiggling anywhere but upwards and away from my cervix and uterine incision.

I've tried not to dwell too much on the "what ifs" -- even my OB saying that we'll cross those bridges if we come to them -- but I would be lying if I said they haven't crossed my mind.  I'm no physician, but I know enough about this and from reading to know that it can be a very serious thing...so I'm trying not to focus on those things, channel the good vibes, thoughts, and prayers from people, and keep in mind that the baby is healthy and looking great right now.

So!  That's your little 20 week bonus update with #3.  Hoping and praying everything continues to go well like it has thus far and there aren't any issues!  Oh!  I didn't set my c-section date...because it's kind of up in the air depending on all of this.  Even if everything goes will the latest I will deliver is January 31st (at 39 weeks), but could be earlier than that.  So lookin' like a January bebe!  Exciting!
Email Post
Labels: 20 weeks baby #3 baby Mooney placenta previa prayers pregnancy update