Okay friends, it's that time of the year again...time to take the kids + Scoots to see SANTA!

Here's a nice little link up to last year's adventures if you'd like to walk down memory lane with me.

Anyways, this has become a yearly tradition for this Mooney gang so Santa pictures will be happening in early December from here on out!

Way back before Thanksgiving I made Santa reservations for a Monday night because 1. reservations make things go soooooo much faster 2. we can only bring Scoots on certain days/times so I wanted to make sure to snag one of those 3. they fill up SO FAST!

So the time had come and I was actually really excited and had some optimism on how this would go.  All of the kiddos had these adorable and cute matching outfits (which, spoiler, they'll wear again on Christmas Eve and day too.  WOOT WOOT.) and I had a game plan that Patrick and Rosie would stand next to Santa (since Rosie is okay with him as long as she's not sitting on him!) and that Santa would hold Annie and Scoots.  I mean, freak out pics are kinda amazing too (last year's was so good!) but a cute smiling pic works as well.

Anyways, so once the big kids and I got home from school we had a chance for a quick snack before we got Annie and Mike up from their siestas and loaded up in the van to go see Santa! 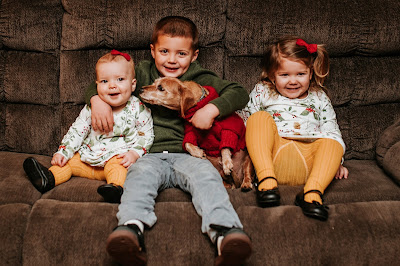 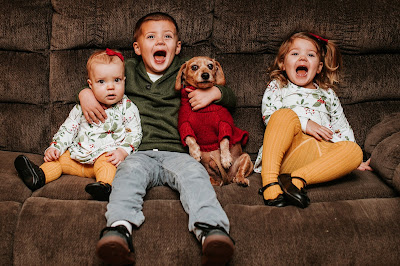 Here are 2 gems from literally about 5 seconds before we loaded them up in the van to go -- I am SHOCKED with how these turned out!  SO GOOD!  My spirits were lifted with their couch snap cooperation and I was hoping for the same kind of luck at the mall.

Now, my expectations were looooooooowwwwwww and totally expected a freak out or four (uh-hm, ROSIE), but I was shockingly surprised!

I should first mention it is always packed and it was not at all this year.  Like we were in and out in less than 20 minutes -- the longest part was getting our pics printed!  So that was a nice treat.  I hate crowds and avoid them at all costs cause they give me major anxiety but I always let that go for these pics, cause, TRADITION. 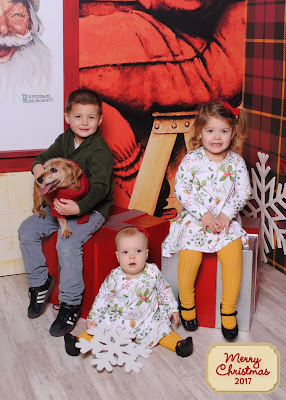 New this year was they do a 'practice picture' before you see Santa and shockingly it went well!  Lots of fake smiles!  Haha! 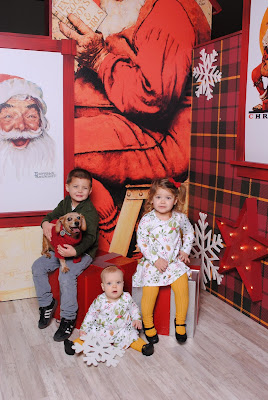 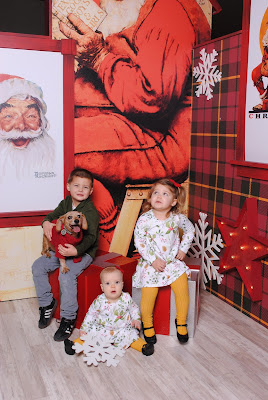 And since I'm a mothersucker I bought all of the digitals so here are some other gems from the 'practice' session.

After the practice pics they went to see Santa -- I told Rosie to just stand next to him (cause she told us in the car on the way over she did NOT want to sit on his lap! Just hold his hand!) but the next thing I knew she was taking off and ran into his arms, gave him a hug, and climbed up on his lap.  I kid you not.  I had to pick my mouth up off of the floor cause I was totally expecting another freak out a la last year's pics. 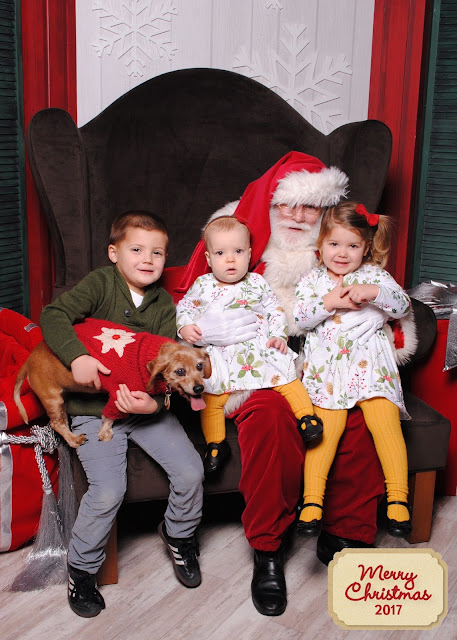 Anyways, I am sooooo happy with how this year's pic turned out!  Everyone is looking!  No one is crying!  Fake smiles all around!  Just the best. 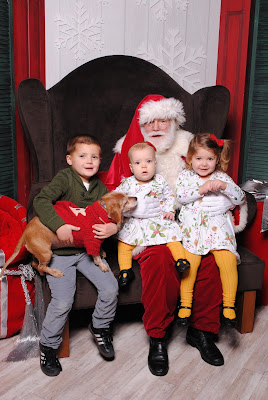 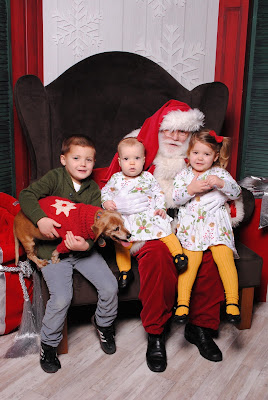 And some outtakes for good measure too.  Gosh, it really was a great night and the kiddos had so much fun and were SOOOO good. 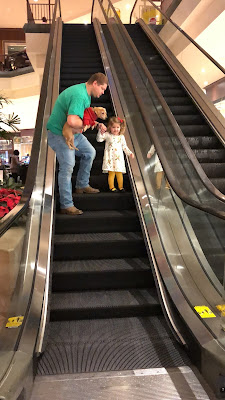 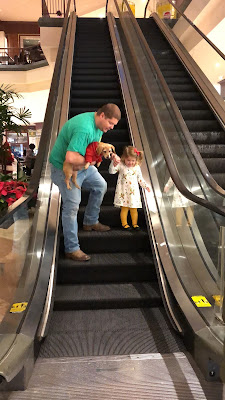 Ro thoroughly enjoyed the escalator ride too, by the way. 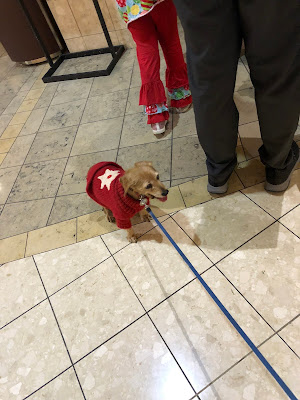 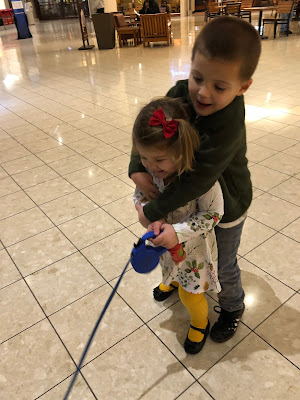 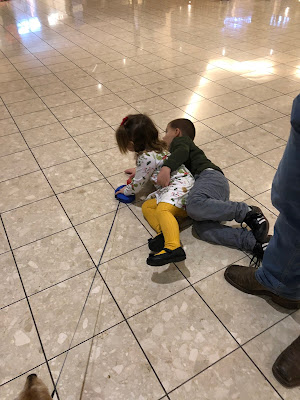 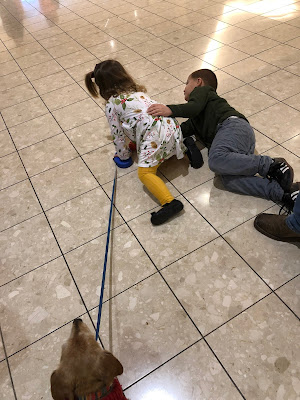 The big kids took turns holding Scoots and then tackling each other on the super soft tile floor 😑 while we waited for our prints.  That took the longest, and had we gotten them faster we'd have been in and out in less than 10 minutes which was AWESOME and I'm blogging for next year when I dread doing this because of my crowd anxiety but I will read this and it won't be too bad.

Anyways, what an awesome year 2017 was for Santa pics!  I cannot wait to see what 2018 holds!! EEEKKKK!  Kids really do make this season so much more fun and magical. 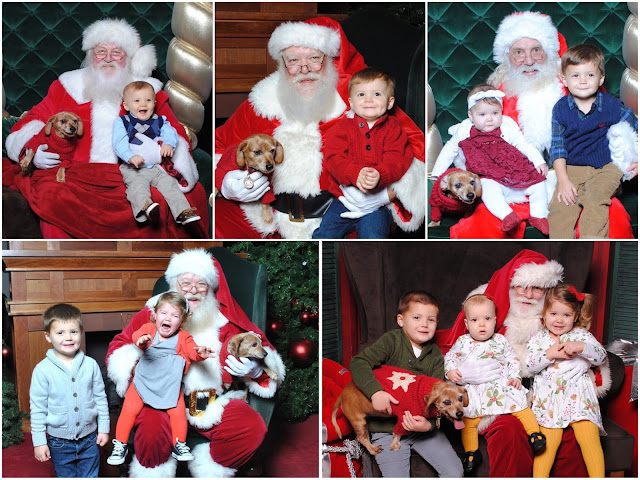