Wow.  What a night!  So, yes, this wasn't Patrick's FIRST Halloween, but last year he wasn't even 6 months old and we just camped out inside handing out candy to the trick-or-treaters and he passed out by 8pm (although I did snap some pics of him and Patrick in their costumes...a cop and a dachshund wearing dachshund jammies! a little throwback for ya here:) 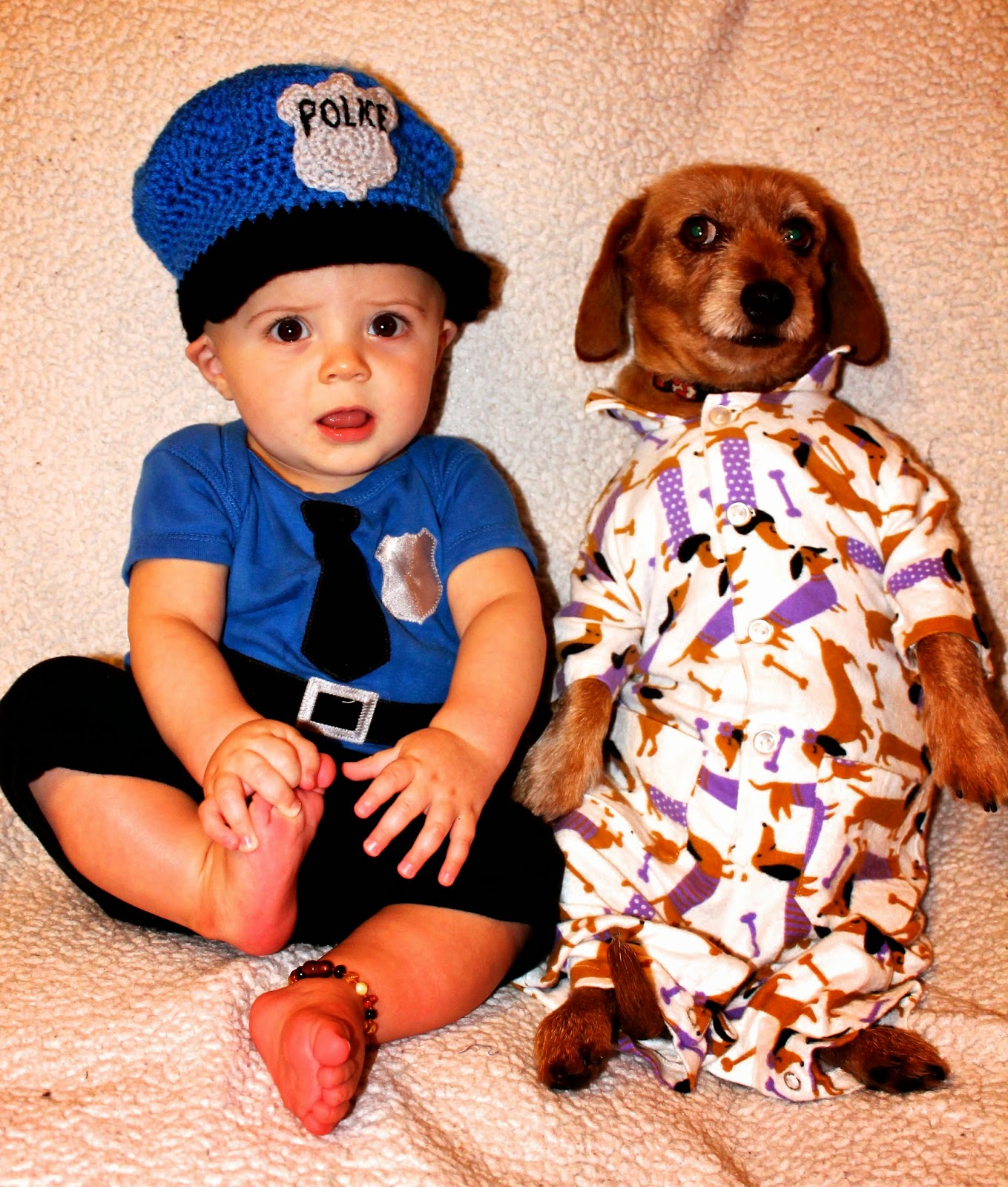 Before I delve too deeply into what the boys' Halloween entailed, I should point out I wore my skeleton with baby in the belly shirt to school for Halloween and I was SHOCKED at how many people took this as my official pregnancy announcement (especially the students!).  They were all immediately like, "OMG!  You're having a baby?!!  That's so exciting!  When are you due?  What's the gender?" and so on.  I was SHOCKED.  I'm not exactly small, nor am I hiding anything, so I was floored that they didn't know.  I guess they're just either A. really good at playing dumb or B. suspected something but never wanted to ask until I said something (which I respect...maybe they read my rant post. hehehehe) 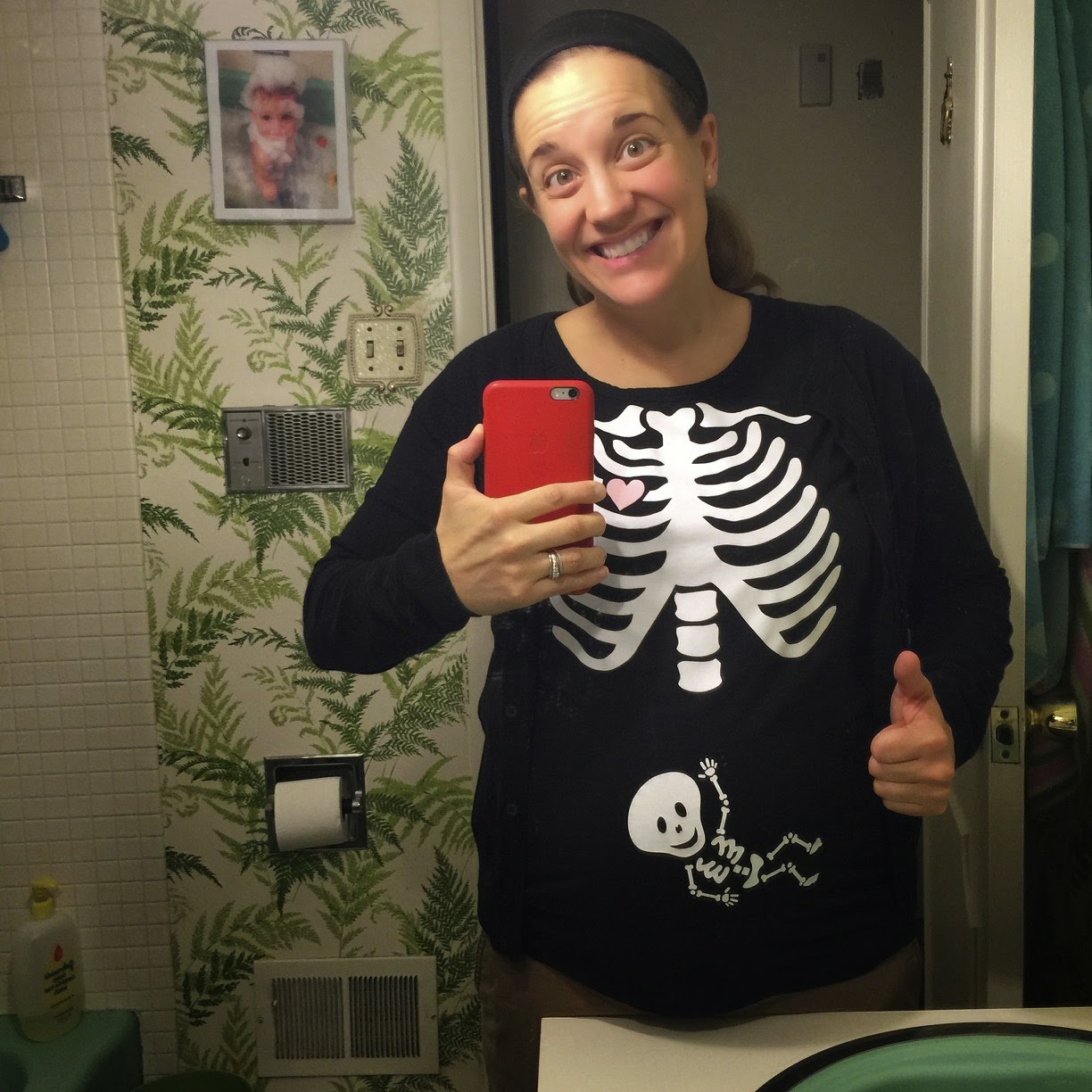 Anyways, so this year was great.  Patrick dressed as Scooter, and Scooter dressed as Patrick (cue: awwwwwwws!).  I snapped a few pics before we had dinner and went out trick or treating of these two brothers.  I want to point out that I did NOT pose the hug--Patrick is OBSESSED recently with giving hugs, primarily to Scooter, so he had Scooter in a pretty tight snuggle for most of these pics. 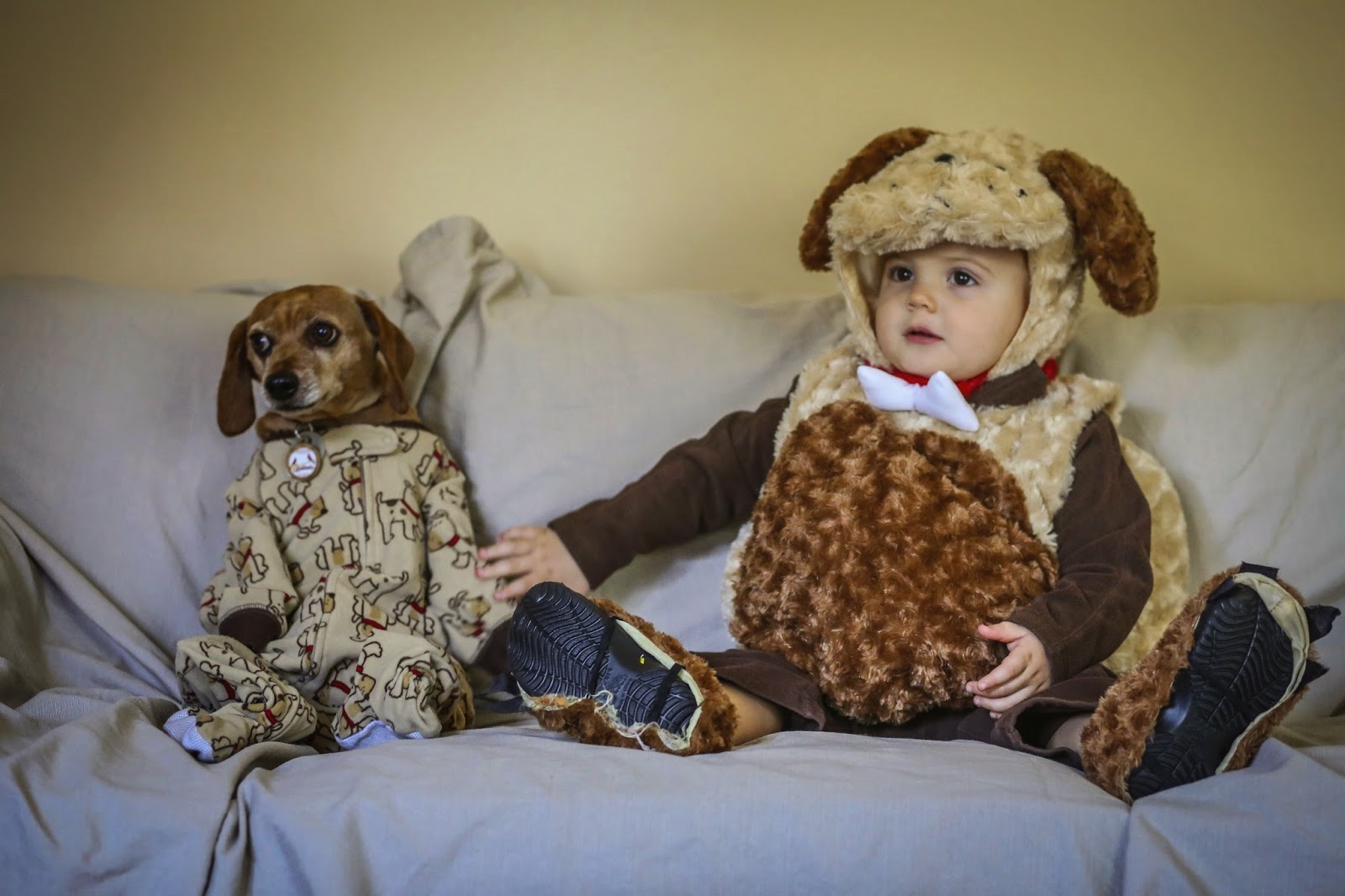 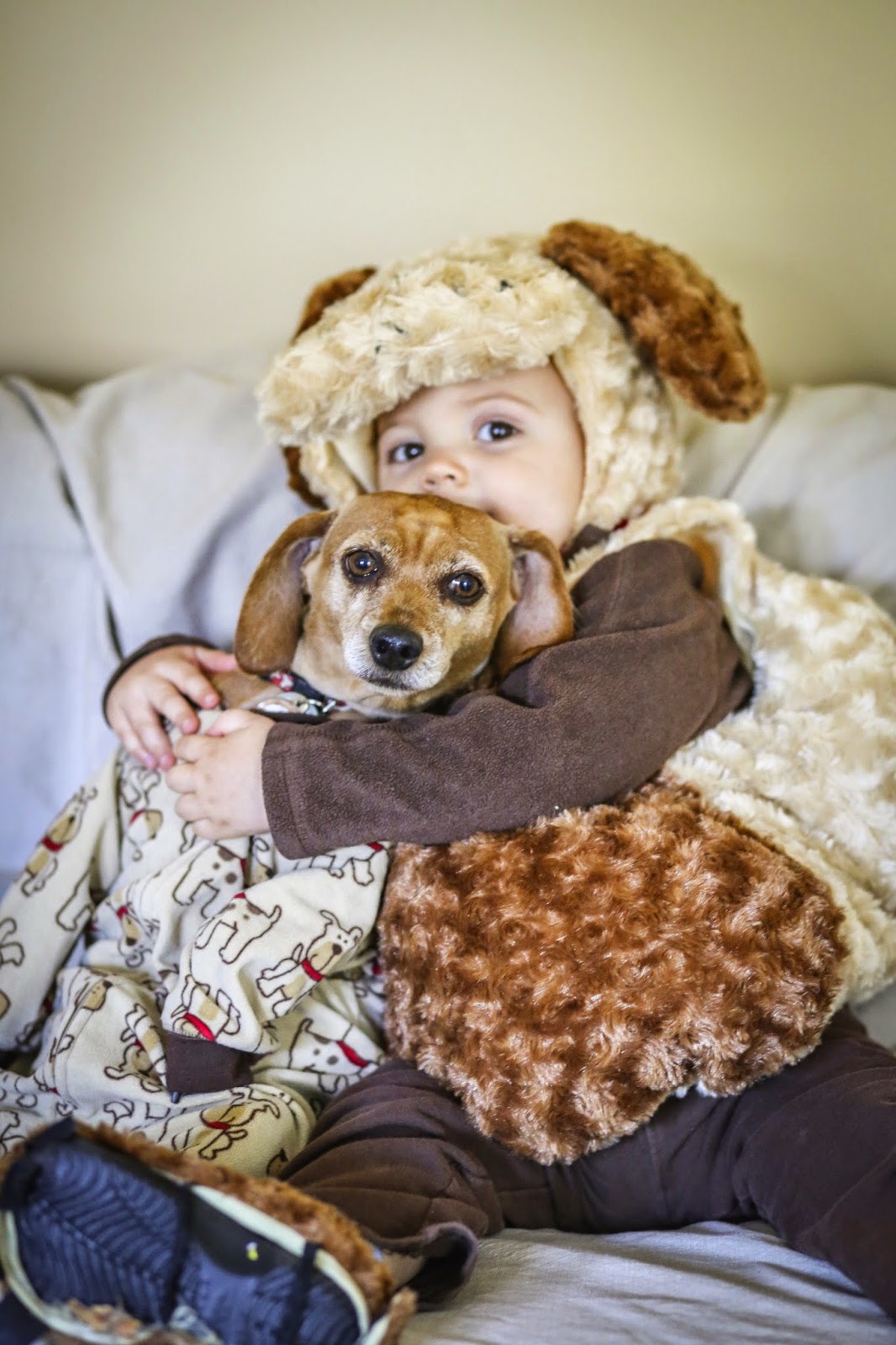 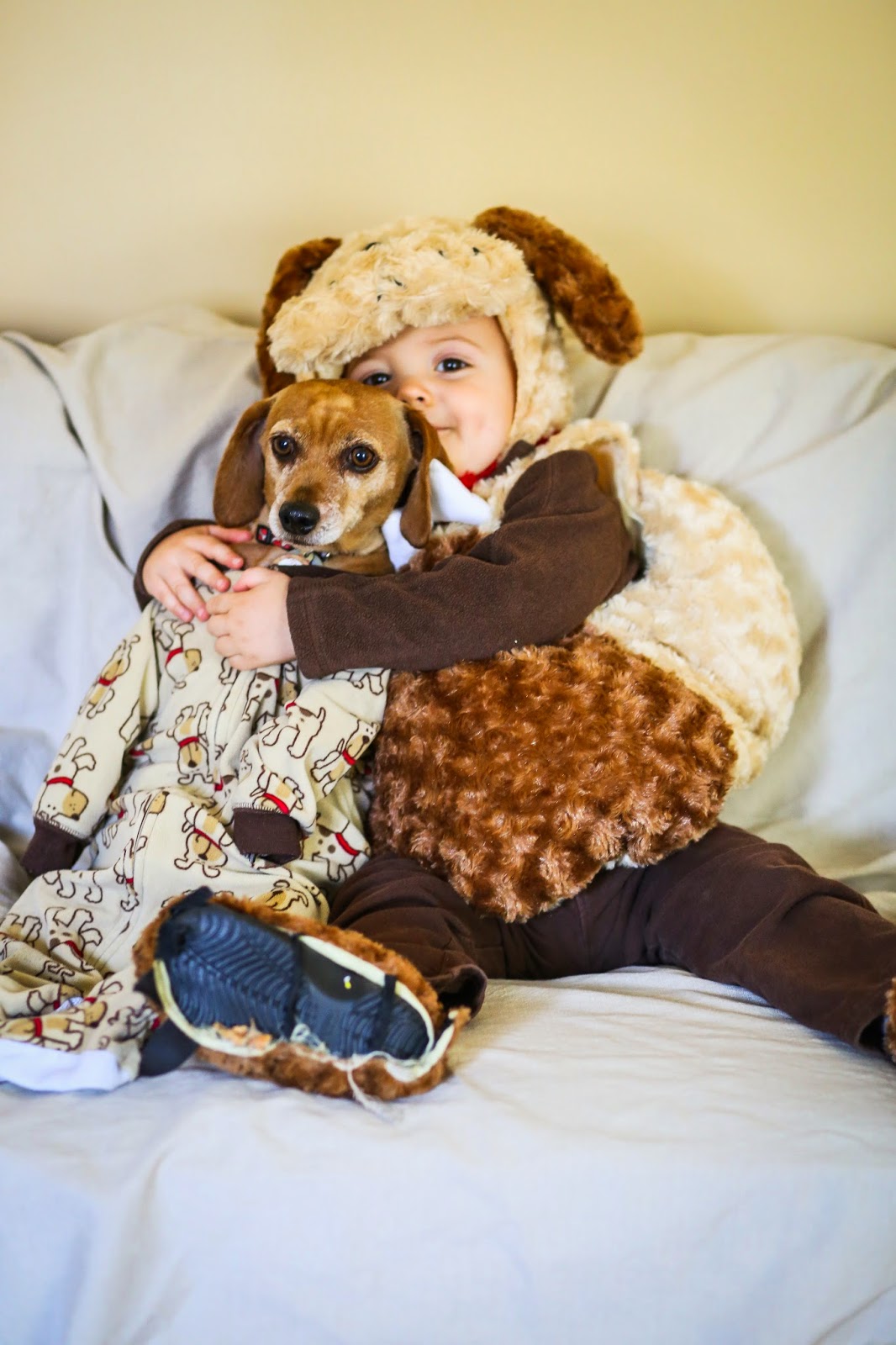 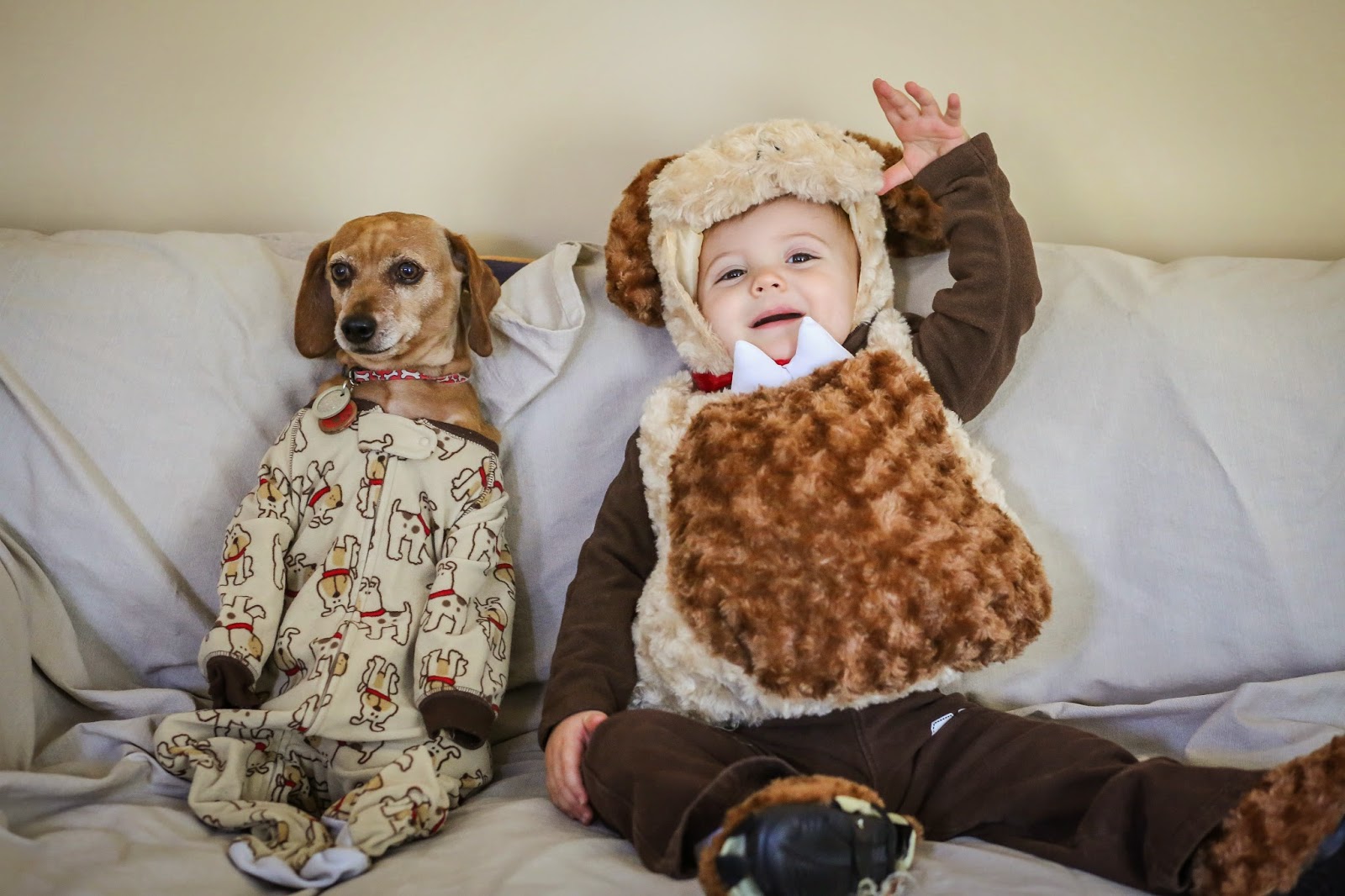 Our friends the Rosenbergers just moved back to STL from Seattle (and we could NOT be happier!!!) so they joined us for trick or treating this year.  I hope we can make a tradition out of this--it was so much fun!  We missed Joe--Robyn's hubby--who's still in Seattle but headed to STL very soon--but we had a blast with our boys chowing down on IMOS pizza and trick or treating throughout the neighborhood. 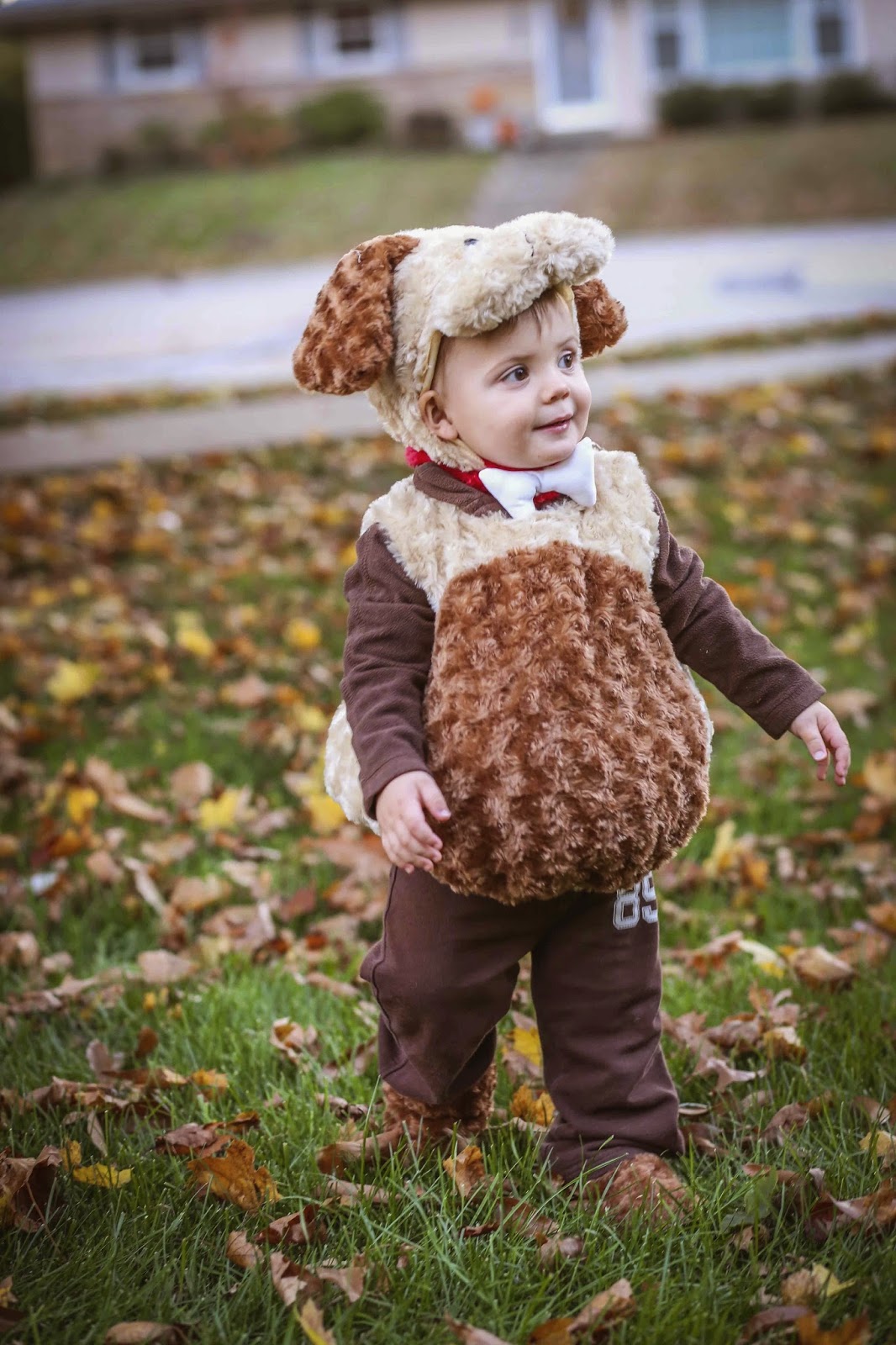 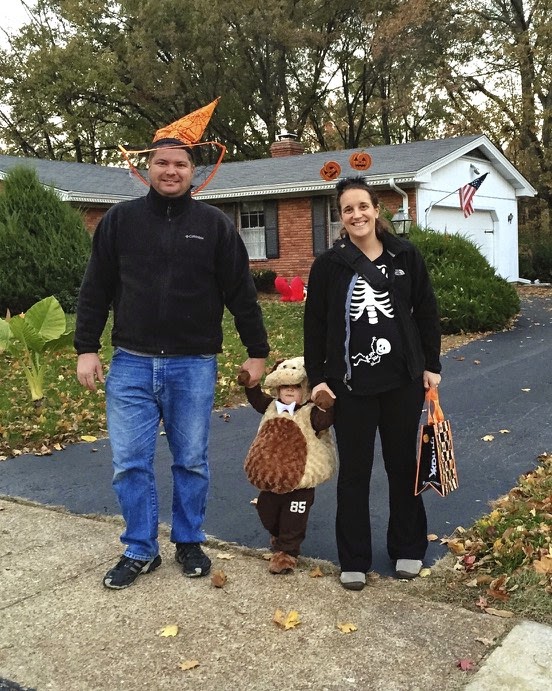 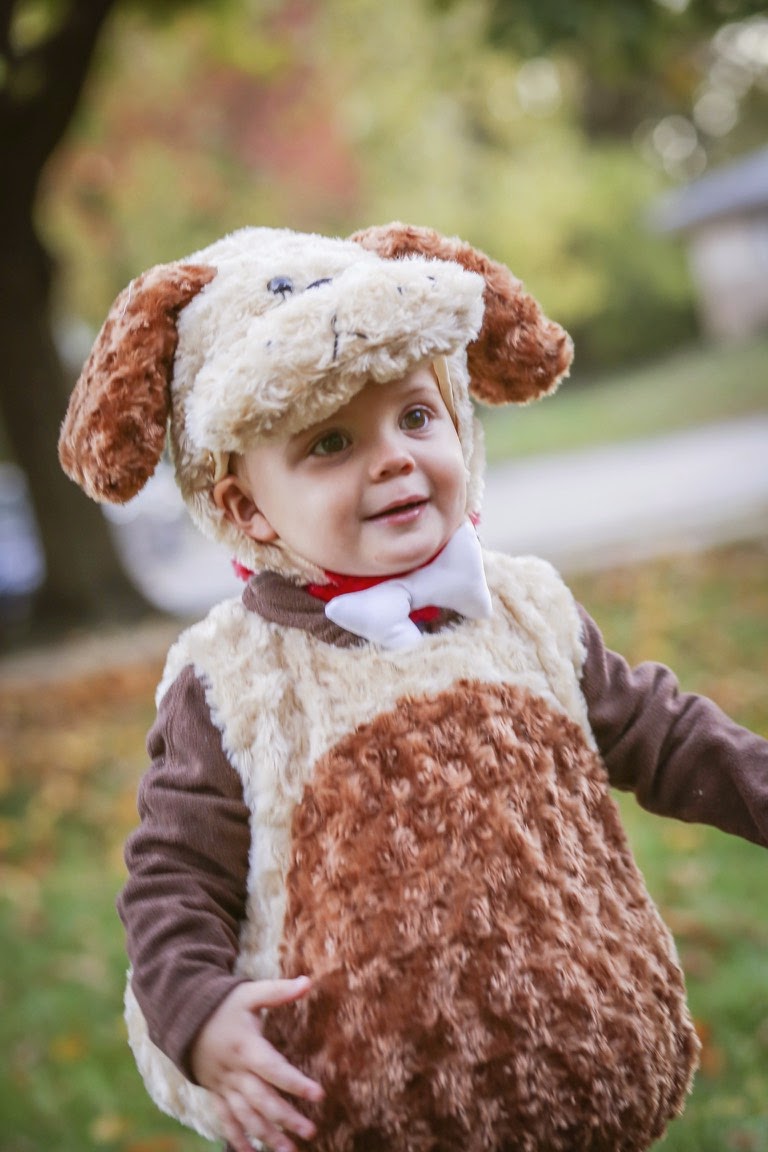 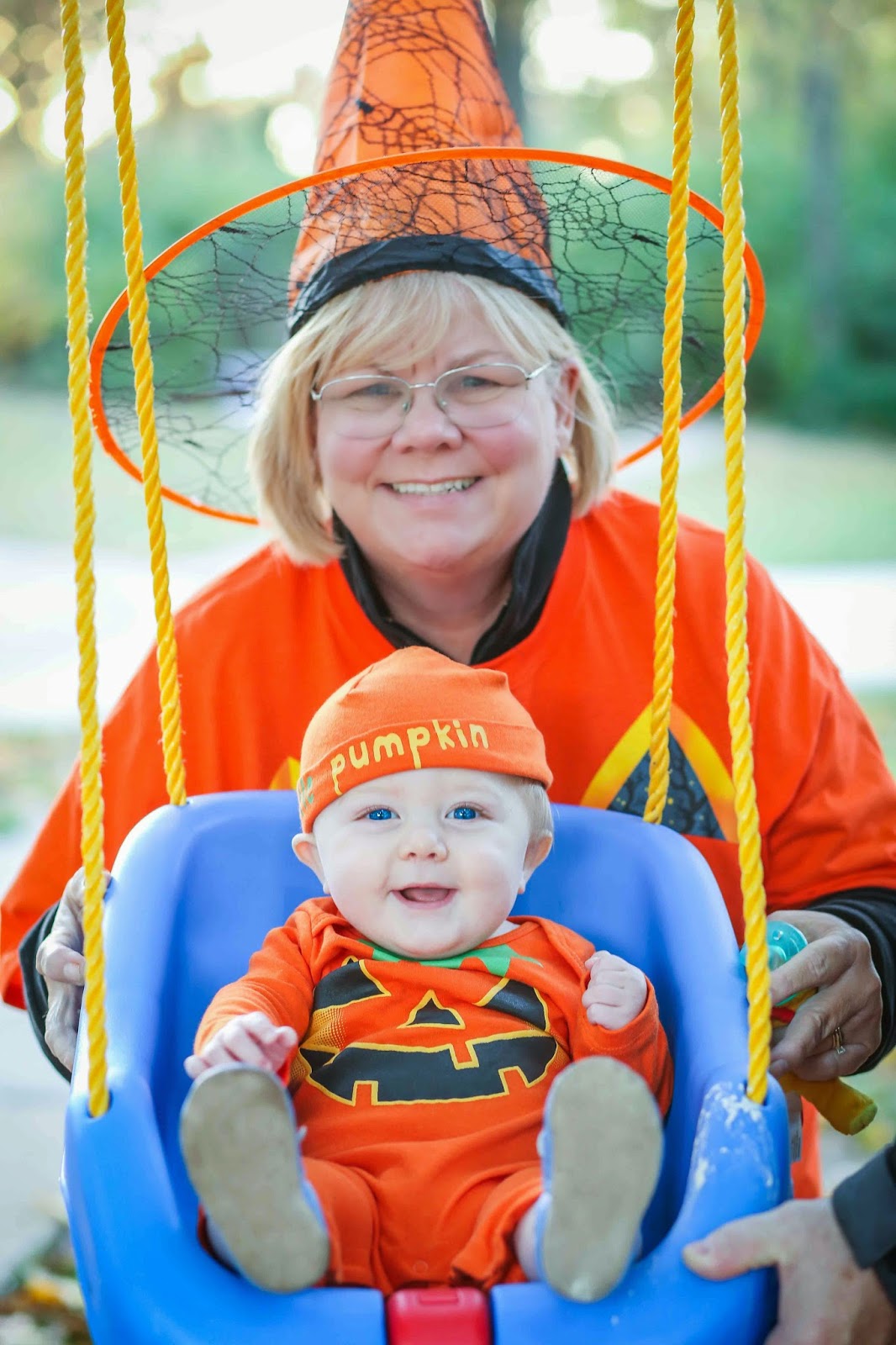 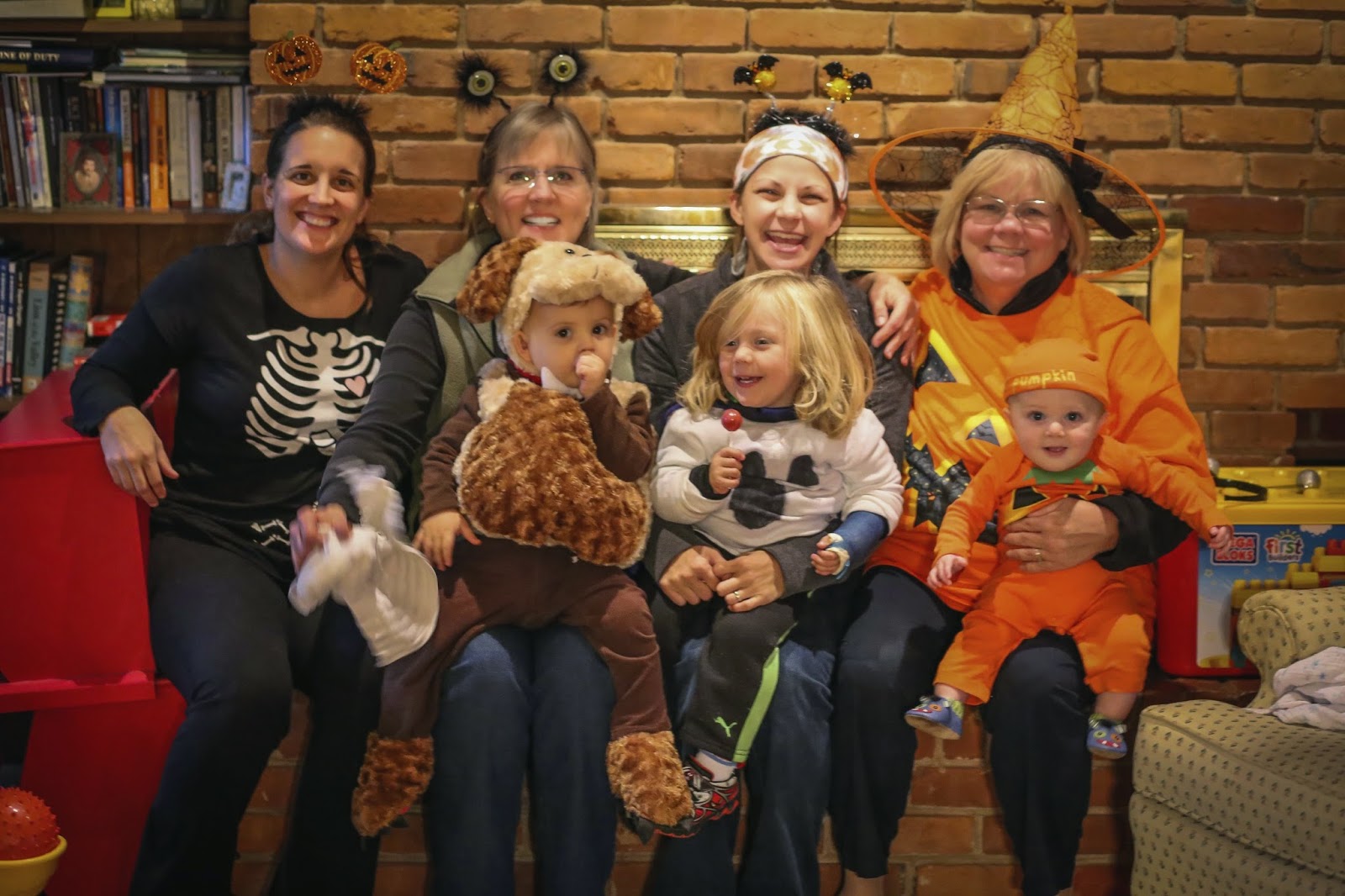 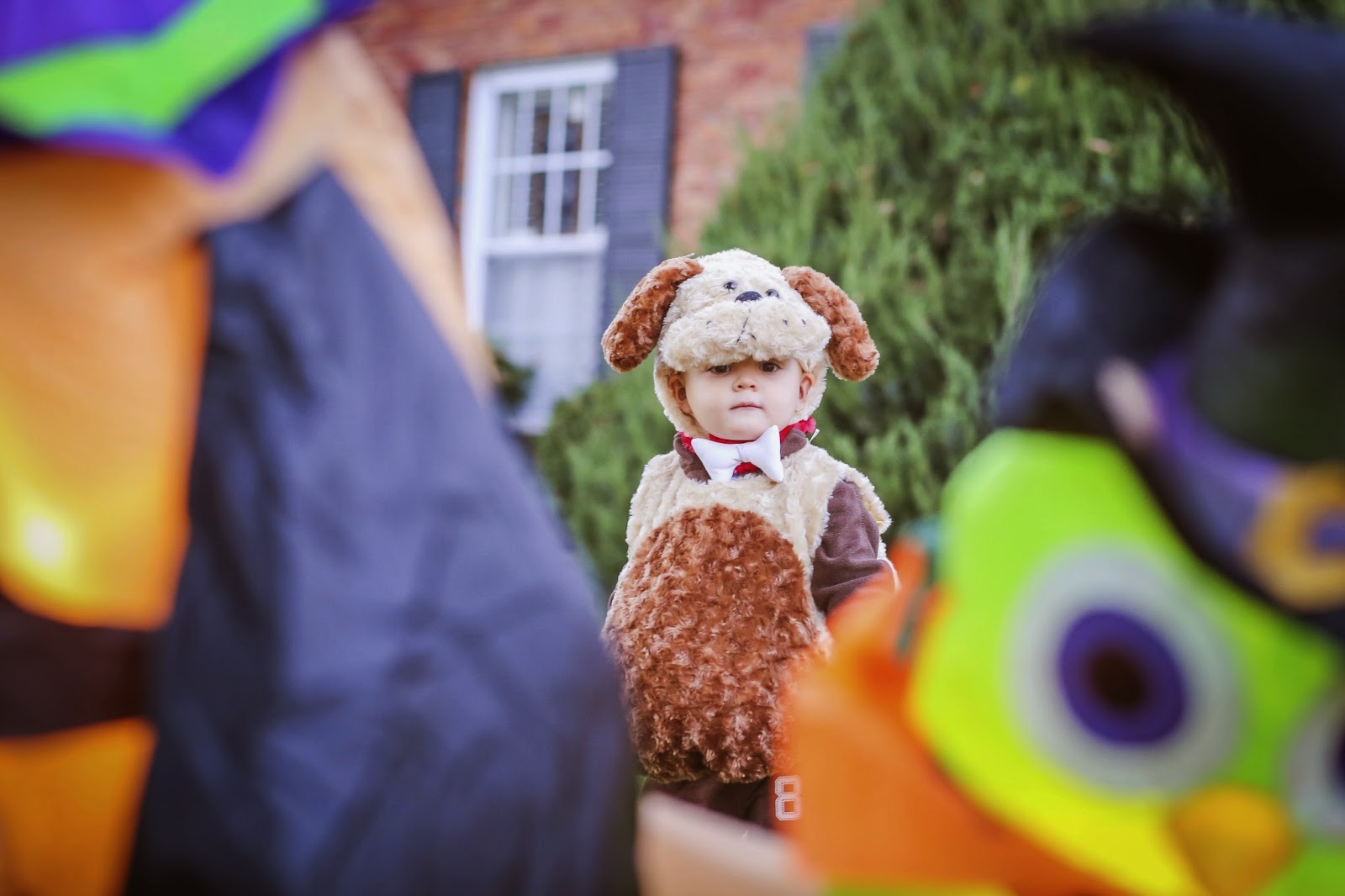 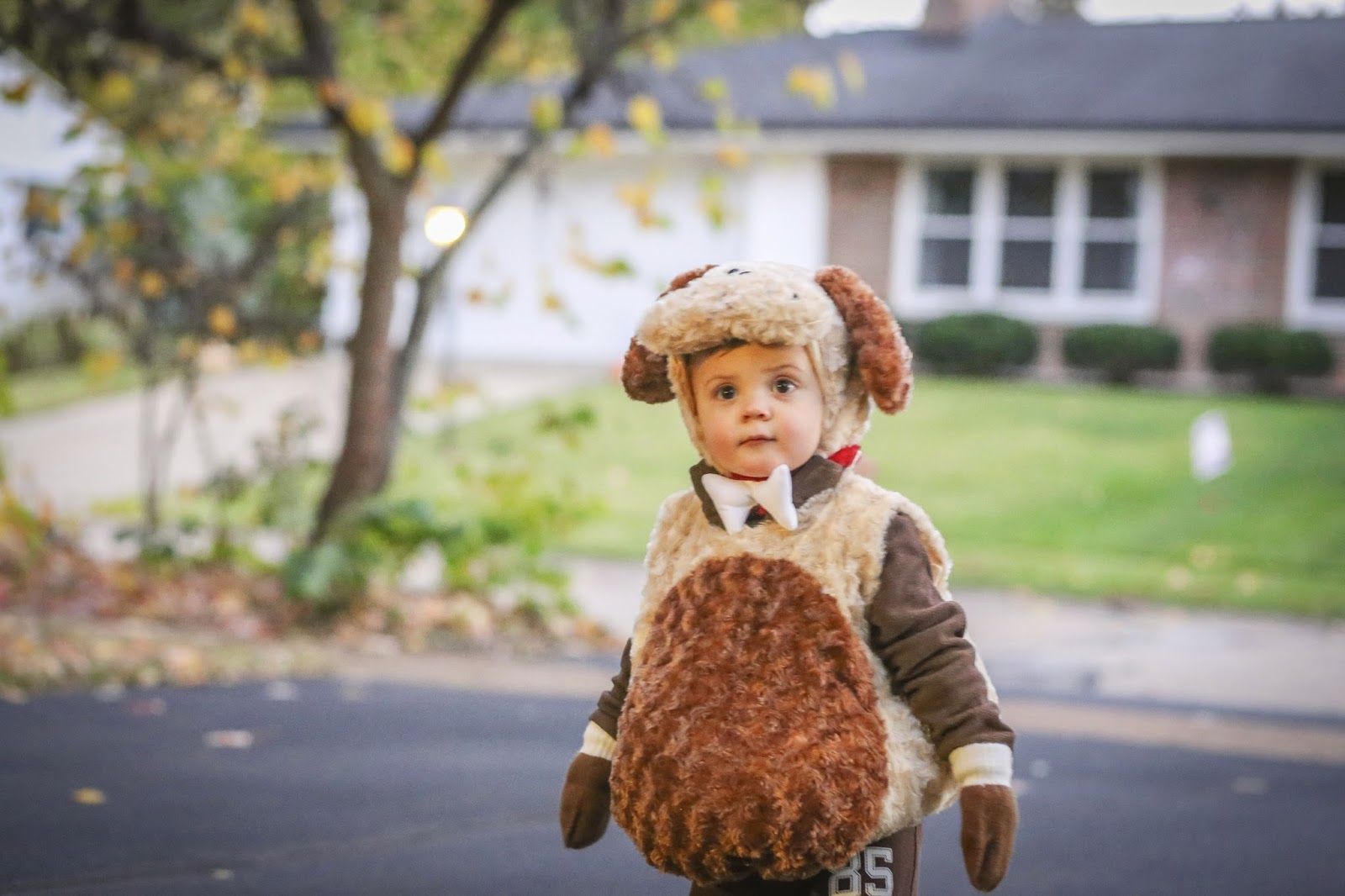 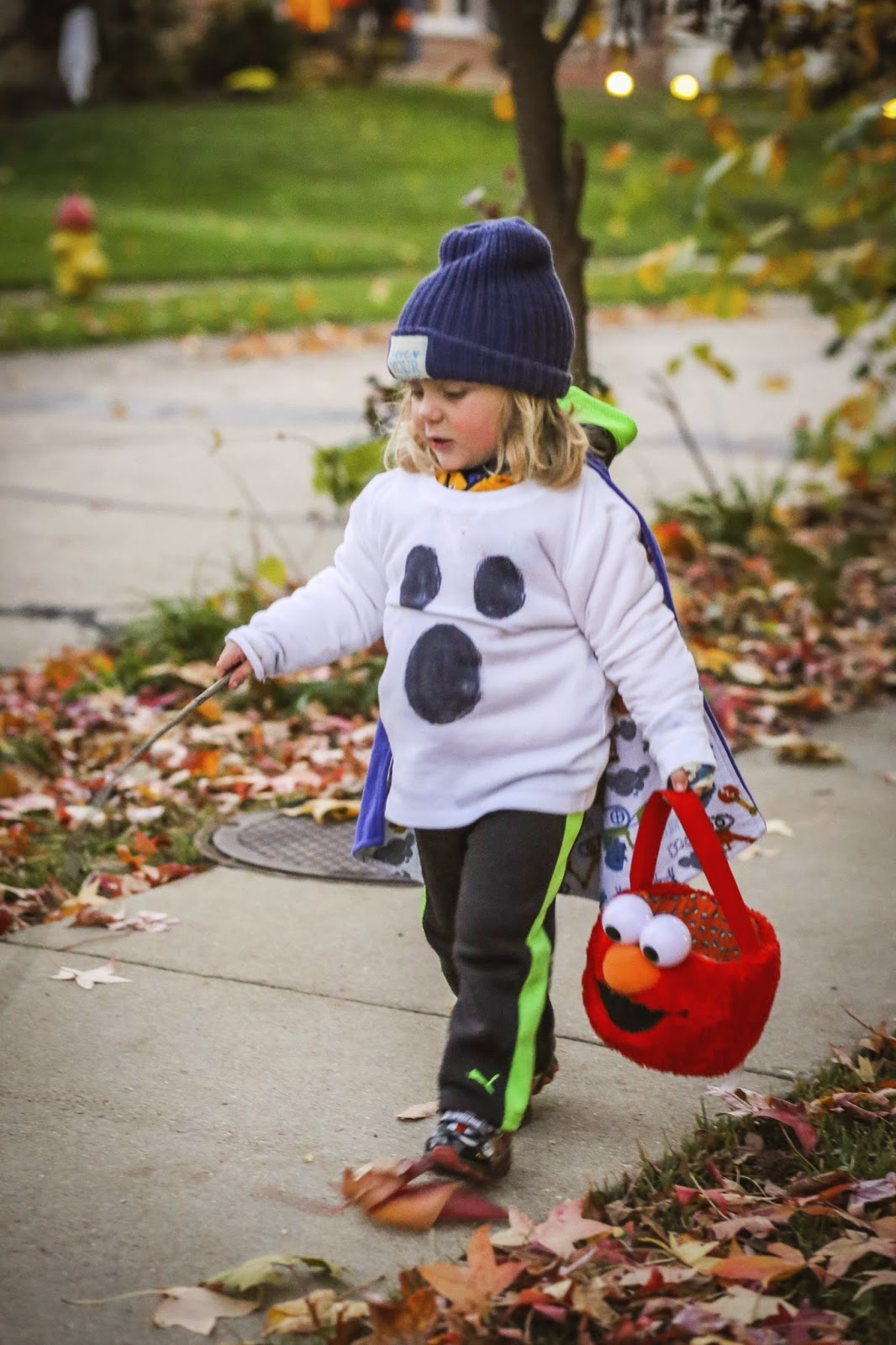 The boys had a BLAST trick or treating (even though it was FREEZING out!) and Robyn and I thoroughly enjoyed catching up and chit chatting.  Both of our moms (who have been best friends since grade school) came along too, so it was so great that our kiddos are going to grow up together just like Robyn and I did and our moms.

Here's a little comparison pic form 2013 and 2014 Halloween...my oh my, how time flies!  This time next year there will be a little 6 month old sausaged in there as well! :) 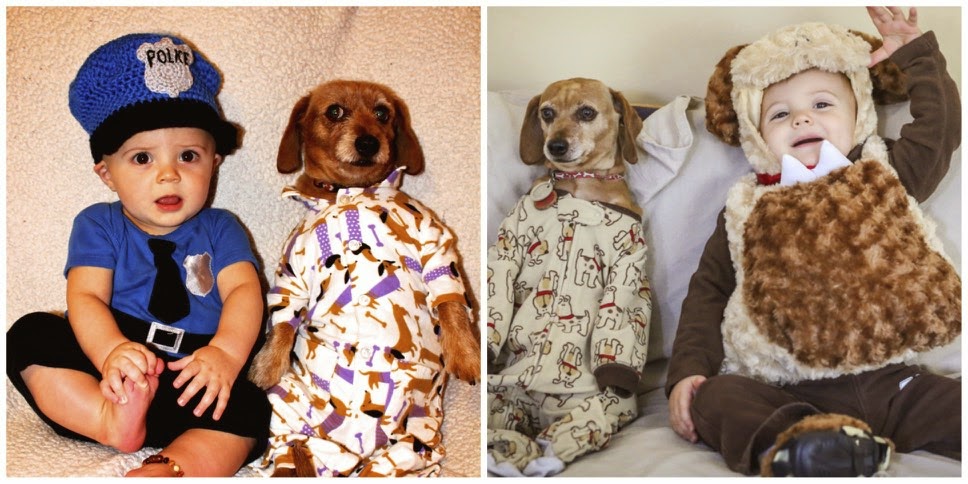 We had a fantastic Halloween with our little family, and even though Patrick is still young, I think he really enjoyed dressing up and going to the houses to trick or treat.  However, his FAVORITE part had to be seeing other dogs (real dogs) and chasing them and wanting to play with them.  He truly is obsessed with dogs and it is so darn funny.  My mom captured this little number below, and I've watched it at least a 100 times and die laughing EVERY.SINGLE.TIME.  I want it noted that Patrick walked up to this dog SEVERAL times, unprompted, to "play", so after a few times of doing this, my mom whipped out her phone to record it.  So funny.  Patrick's little giggling during it is just the cutest too.  Enjoy!