How is my little man a year and a half old already?!!  Seriously.  As I was looking at Timehop this weekend it was showing me all of his 6 month pictures...and now, I'm sitting here blogging about how he is 18 months old!  Time, you are officially going too fast. 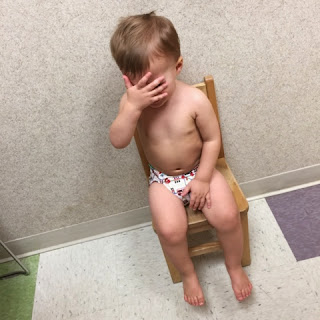 Although this post is a day late, I wanted to delay it till after we went earlier today for his 18 month check up so I could include all of those fun-filled official stats for your viewing pleasure. 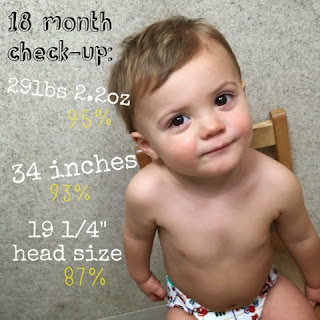 Patrick is 29 pounds and 2.2 ounces and is in the 95th percentile for weight.  He's 34 inches long and in the 93rd percentile.  His noggin clocked in at 19 1/4th inches and in the 87th percentile.  Yeah, keeping consistent my little chunk--dude is a solid rock.  I'd expect nothing less.  And everyone who said he'd 'thin out' and plateau when he started walking, I call your bluff.  He's like 5+ pounds up from that weight!

Here are a few milestones and tid bits that Patrick has recently?? achieved...or I guess since he was 15 months old.  Enjoy.

So that's about all I've got for Patrick's 18 month update!  He is truly growing like a week and learning new things each and every day.  Although I am sad that I don't get to spend each and every day with him, I do look forward to our afternoons and evenings and weekends SO MUCH MORE because of it!  And knowing I have an entire summer to spend with him too is nice as well.  Until 21 months...grow Patrick grow!
Email Post
Labels: 18 months milestone Patrick update