I wanted to do a quick little update on Scoots after his vet appointment today.  It was almost a week ago--last Thursday--when Scooter was attacked.  As I said before, it was most definitely one of the scariest things I've ever witnessed.

BUT, I am so happy to report today, nearly a week after his attack, that Scoots is on the road to making a full recovery!  I am sitting here on the couch with Scoots curled up next to me snoring away, with Thanksgiving on my mind, and I am just sooooo thankful that my little fur baby is doing SOOOO much better and is going to make a full recovery.  I am so very thankful for that tonight. 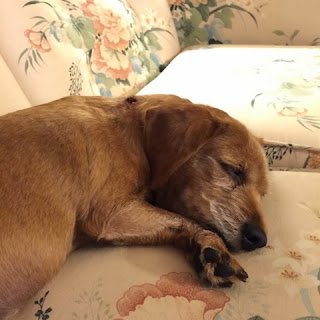 So, an update on Scoots: he's been out of his bandages since Sunday night, but still had his drains in, and they were still draining.  Ick.  So I found a Halloween shirt complete with a hood in his outfit box in the basement and decided he'd be wearing that until he went back to the vet.  It was loose enough to not constrict him or encourage any more swelling, but still would catch any of the gunk that would come out of his drains.  BONUS: it glows in the dark. 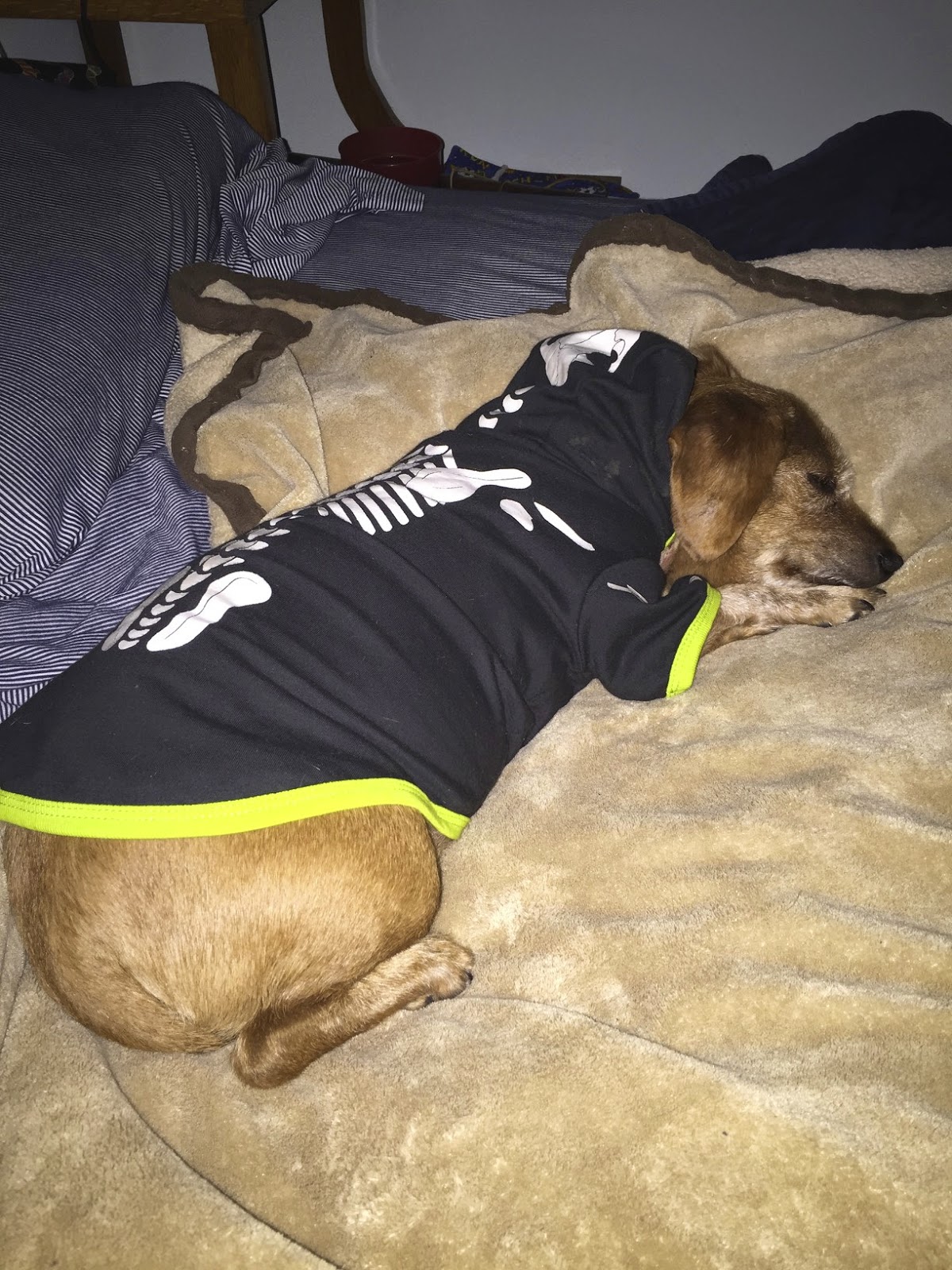 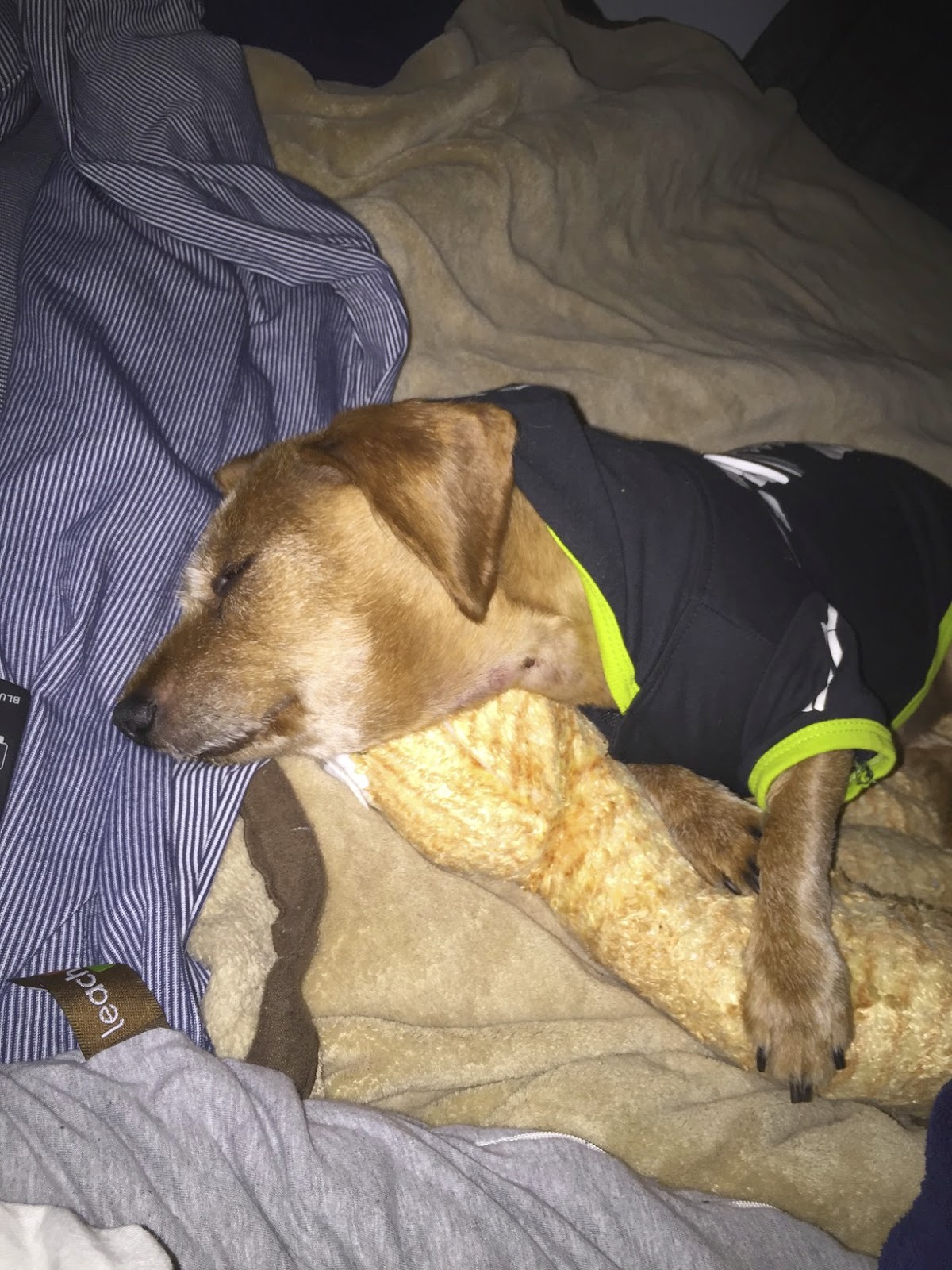 He's definitely still swollen a teeny bit underneath his mouth/jaw, but it has gone down SO MUCH since last week (and even Monday).  I'm sure it'll continue to just keep going down as he heals more.

He's officially DONE with going to the vet!  He's all cleared (and pending no flair ups or infections) he doesn't need to go back for any more wound checks or anything, so that's super exciting.  I think he's more than excited to not have to go back to his favorite place (haha, I kid) anytime soon. 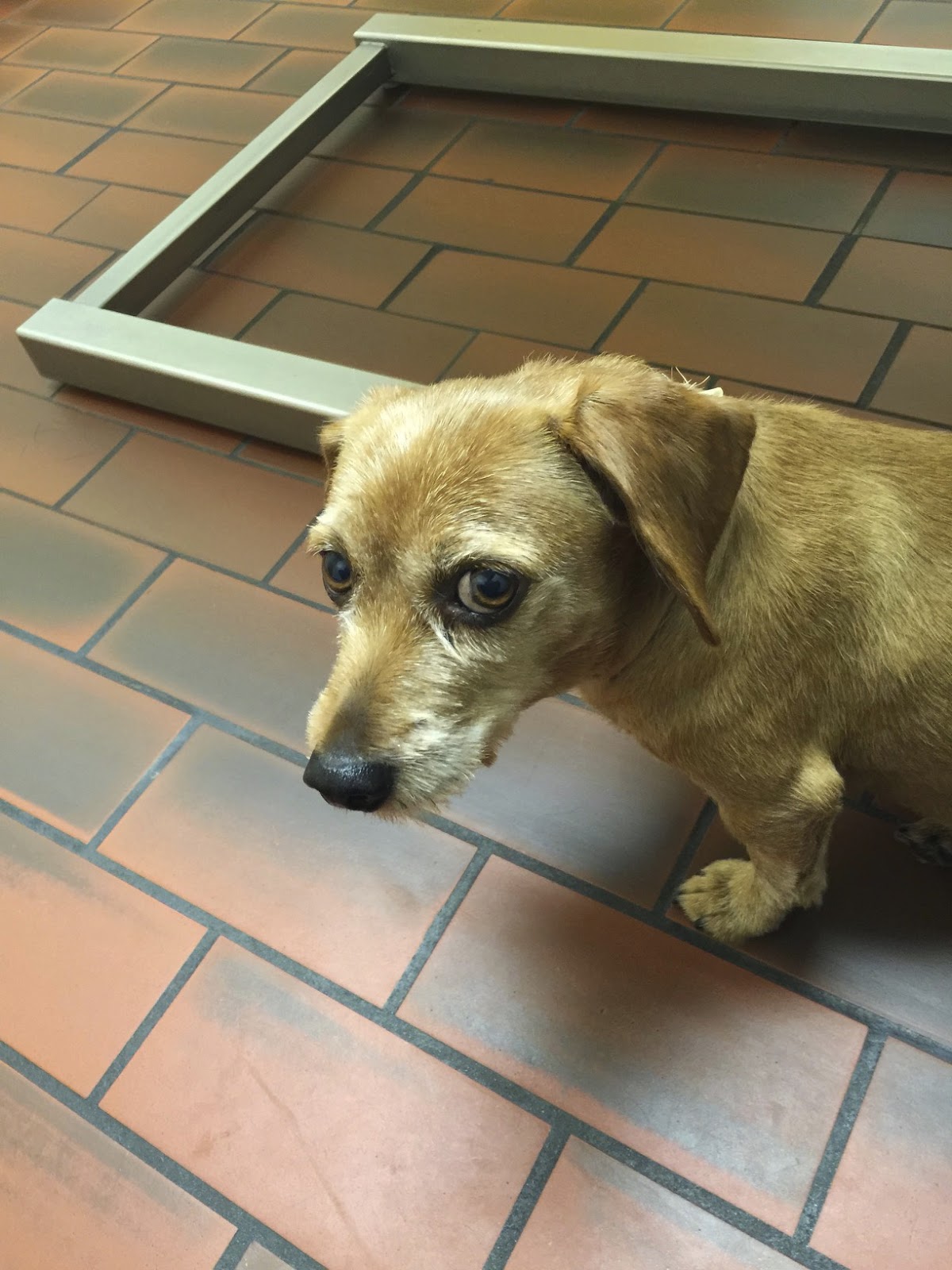 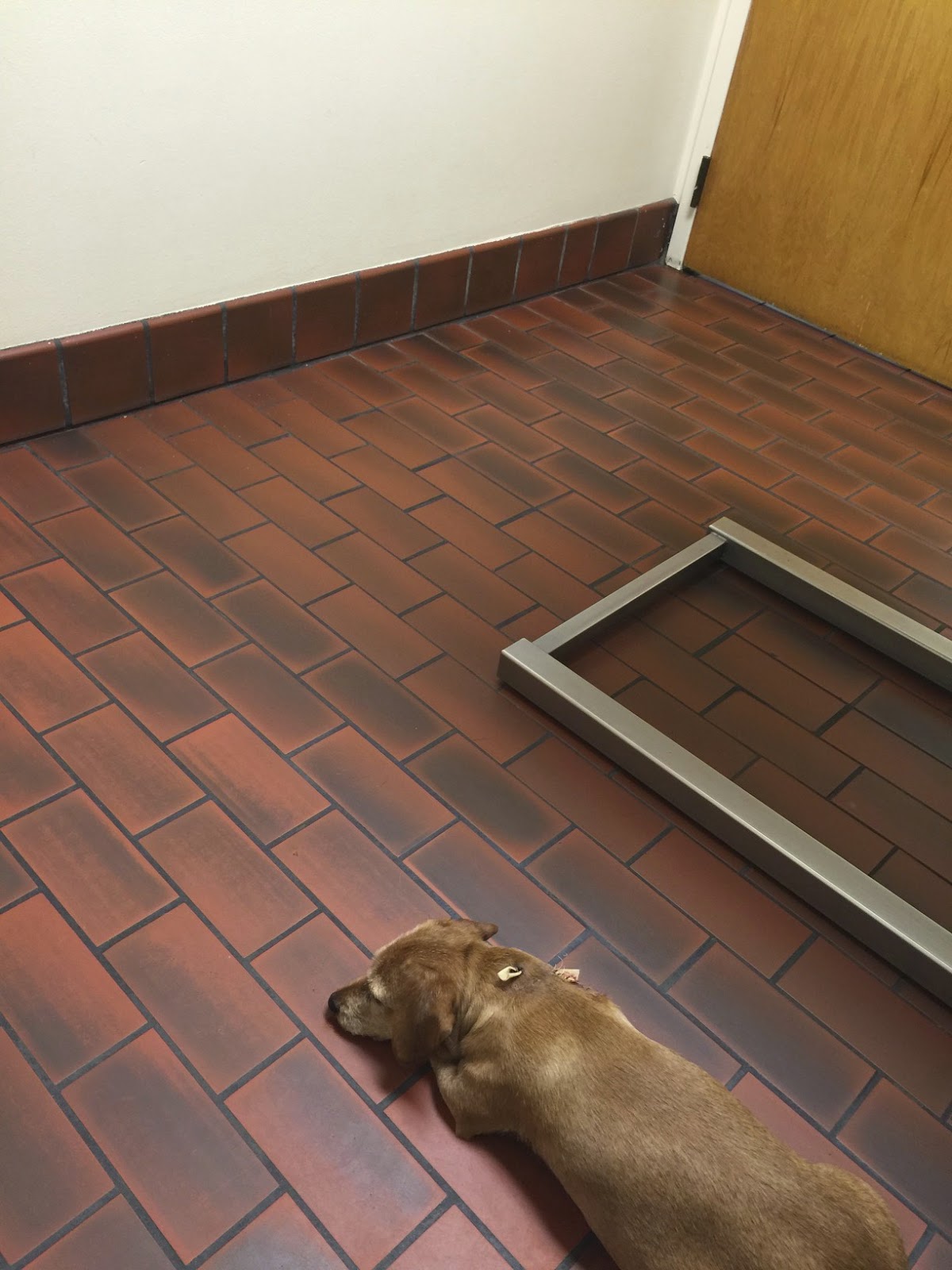 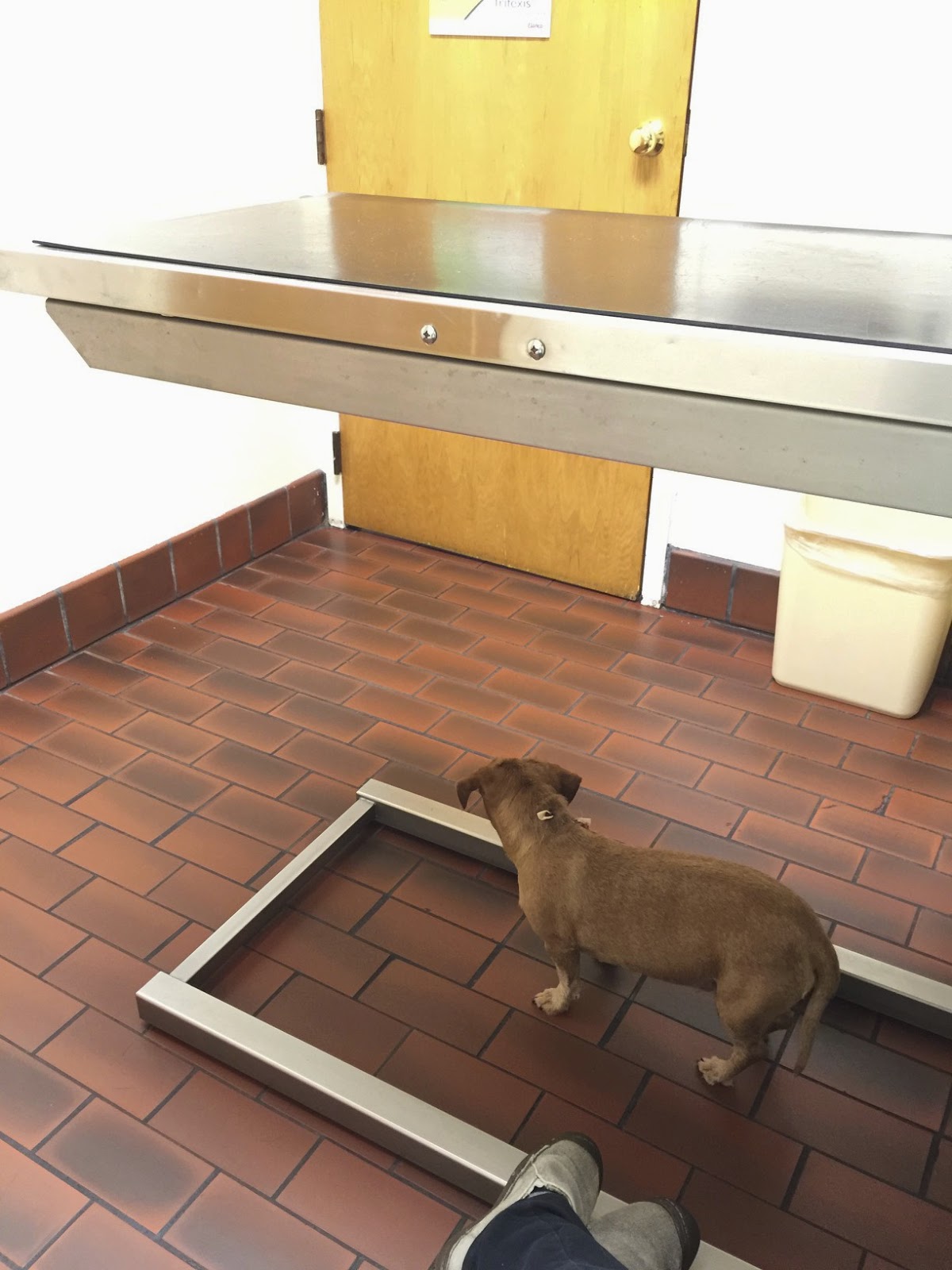 Today at the vet Scootie's doc was soooooo impressed with how well he is healing and how much his swelling had gone down since Monday.  Yes, he's still a bit swollen, but nothing like it was.  And yes, he still has scratches and wounds on his neck and back, but those are all healing very nicely with no signs of infection.  Woo hoo! Scoots got both of his drains taken out today too and cleaned up a bit as well from some of the drainage. 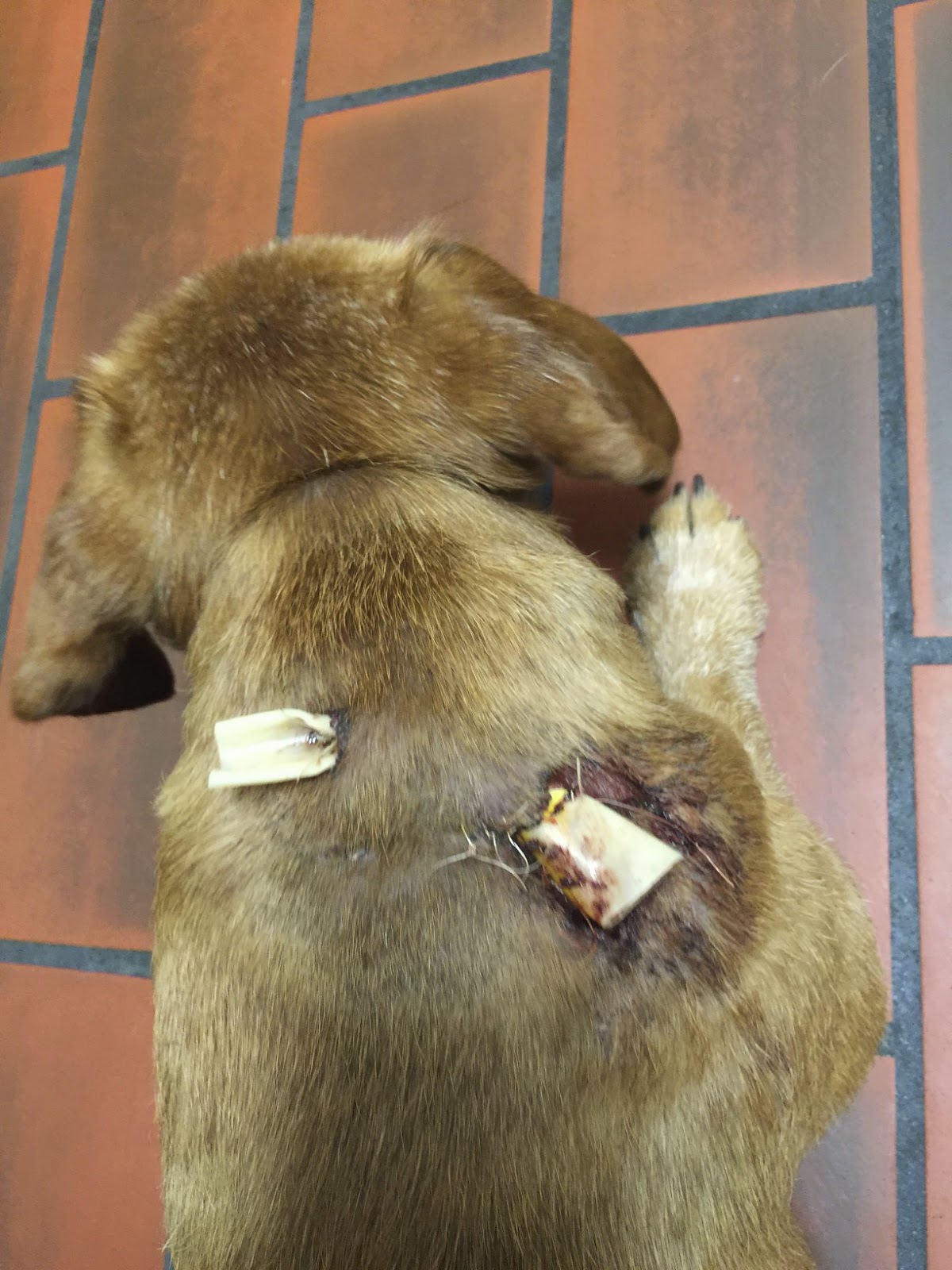 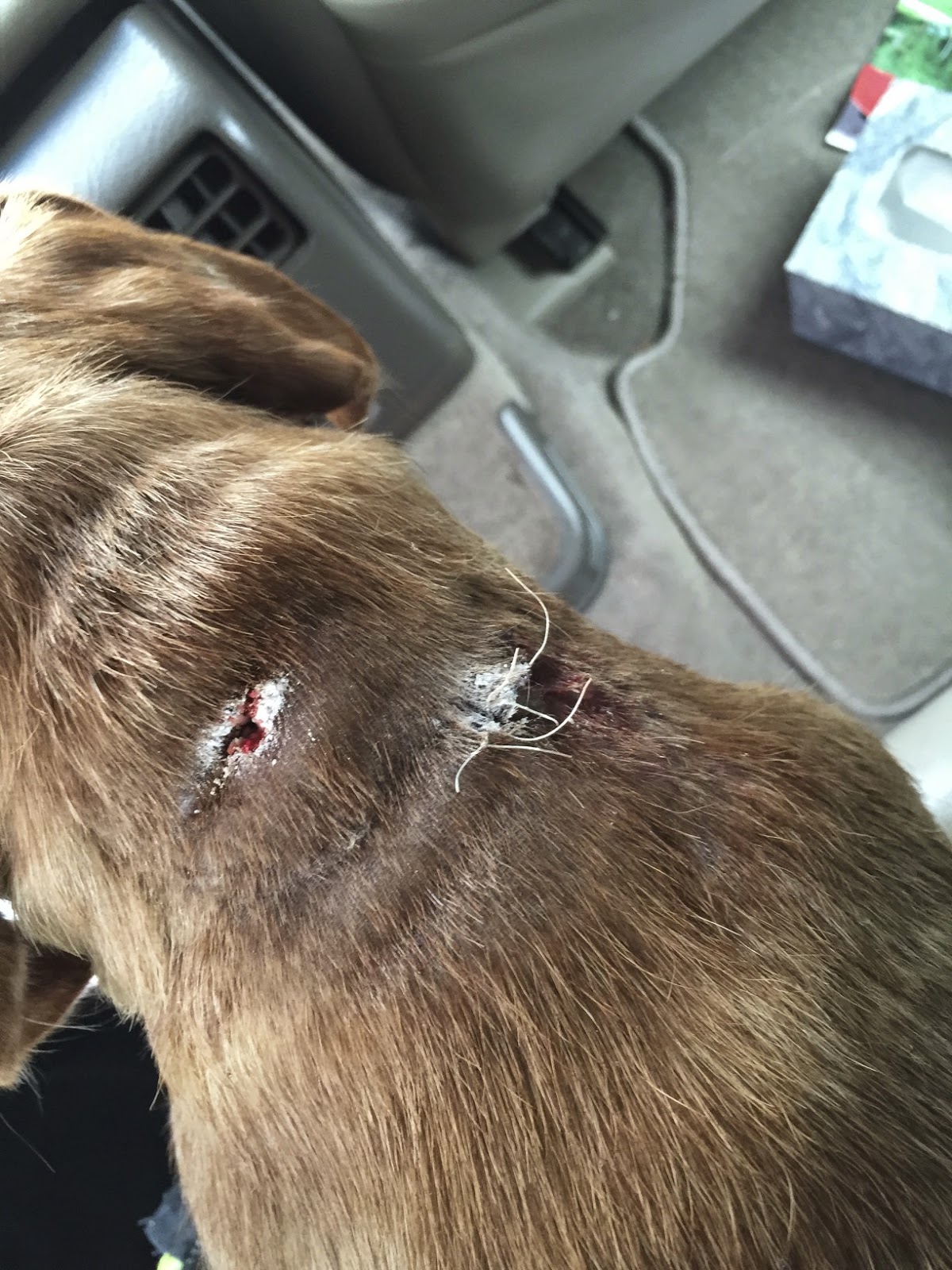 So yeah, those are kinda gross looking, but again, I would want some visuals if I were reading this, so I figured I'd give them.  He does have two small holes in his neck from where the drains were, but the vet said those will close up very quickly and continue to heal like the rest of him.  He does still have some residual stitches from the drains, but those will dissolve out over time as well.  Overall, the vet was so impressed, given his initial injuries and type of attack, for how well he was doing 6 days later.  She gave him a clean bill of health and said he's on his way to making a full recovery!  YAY!!

Mike and I were talking today about how much Scooter has improved in even 2 days, and how he's really getting back to his old self (i.e. playing with Patrick, eating dog food (instead of just cheese that his meds are in), jumping out of the bed on his own, etc...) and we are SO happy to see this!  We are so thankful that our Scoots seems to be getting back to his old self and is going to continue down this path to making a full recovery.

Anyways, just wanted to give you all a quick update and thank you so much for the well wishes and good thoughts--they most definitely have helped so much!  Scoots is obviously not fully recovered (so any good thoughts you can keep sending his way!), but definitely is on his way to that.  Thanks again for all of the support and wishes!  We have the best friends and family EVER.