Ahhhh, what a day for my favorite little guy!  I still can't believe he's FOUR YEARS OLD.  I swear  I just had him yesterday! 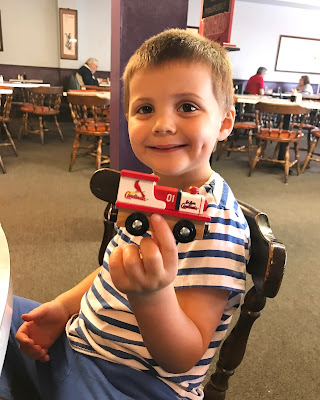 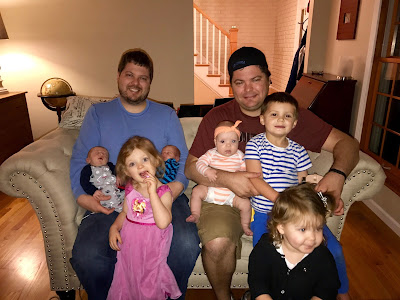 Last night we started celebrating our big guy a bit early (you know, after his party he had on Sunday too!) and we hit up his favorite store Sweet Be's where he got to pick out a new Cardinals train for his Brio tracks!  Then we took the kiddos over to their cousins' house so they could meet the new boys!  Patrick said, "Awwwww, they're so cute!" then ran off and played with Lizzy.  On the way home he said, "Oh my gosh mommy! I forgot to hold the boys!"  Mike and I were dying.  We were like, "next time buddy you can hold them."  So cute. 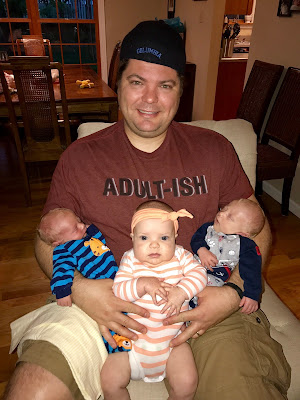 Mike got to hold all 3 of the littlest Mooney bebes and it was so darn cute.  I could have melted!  He's such a good daddy and uncle...especially with that killer shirt on. Haha!
This morning I got Patrick up to go to school -- we skipped our usual donuts for breakfast cause he had school (but we'll have them soon to make up for it!) but he didn't seem to care -- he was so excited to get to school to tell all of his friends it was his birthday and to share his rice krispy treats he bought for his class!
I had a photoshoot while he was at school, and then he got a real treat with having Goose and Kate pick him up from school.

Once he got home we decided it was time to open presents before heading off to Happy Joe's for his big birthday dinner. 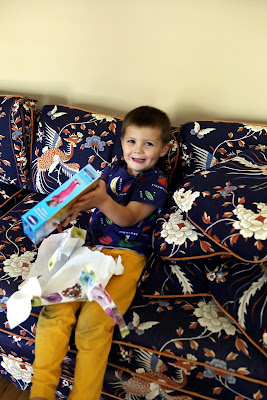 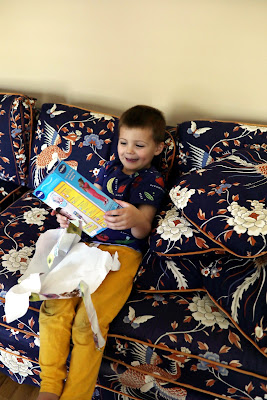 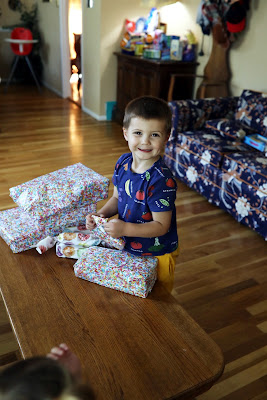 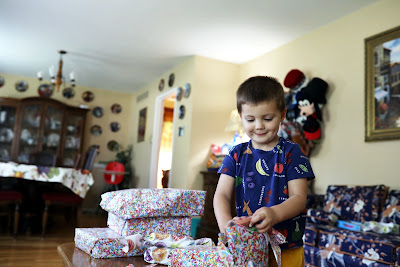 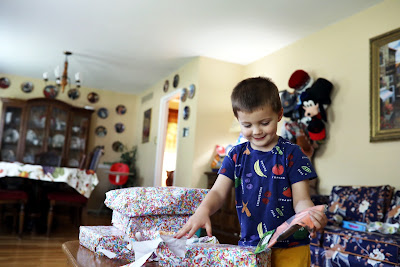 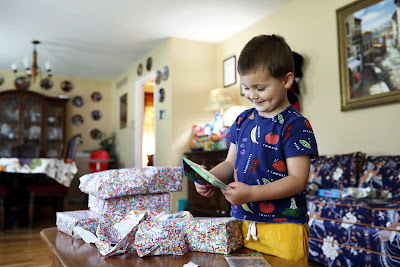 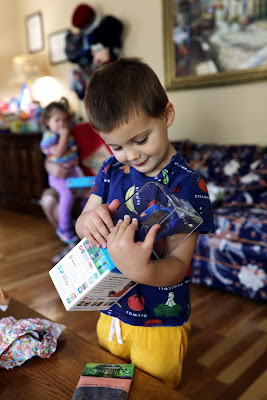 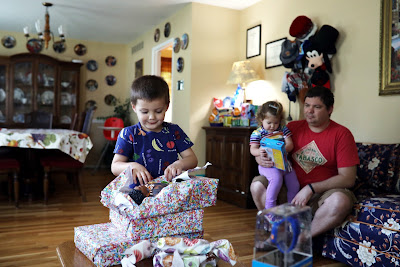 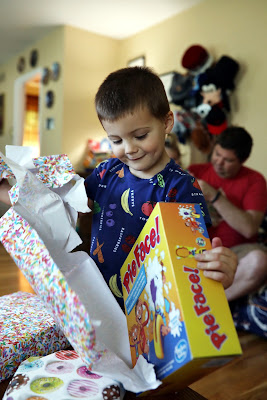 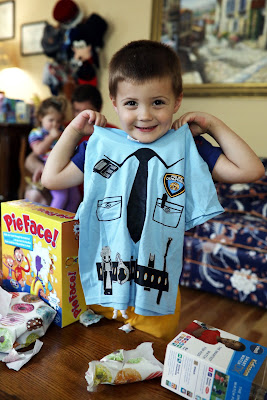 Patrick got some great presents!  A new hotwheels race track, police shirt, kid's smart watch, "Pie Face" game, Maui from Moana, a "cell phone", a giant balloon ball, and probably his favorite, a few Whoopie Cushions!  He had so much fun playing with all of his new toys and was so good sharing them with Rosie too.

We then headed out to Happy Joe's, the kids most favorite restaurant, and we met oodles of family there (18 of us total!) to celebrate! 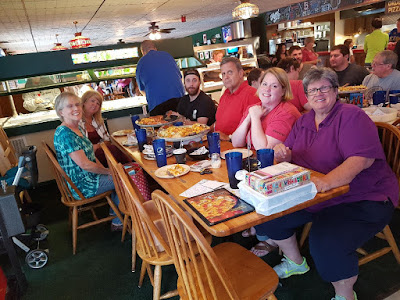 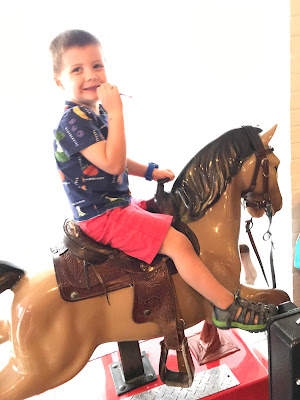 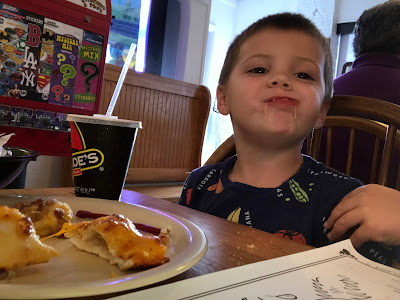 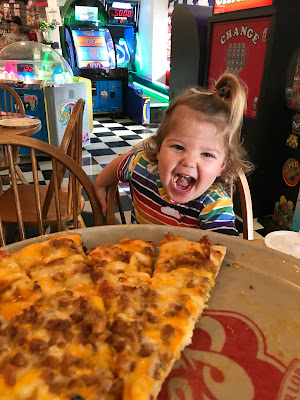 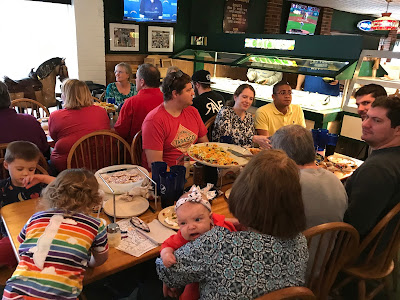 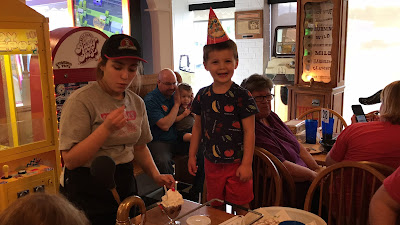 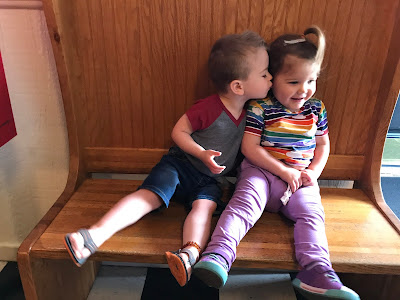 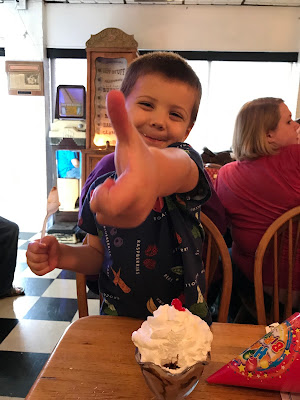 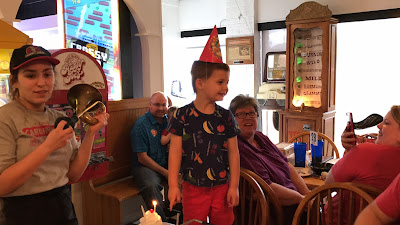 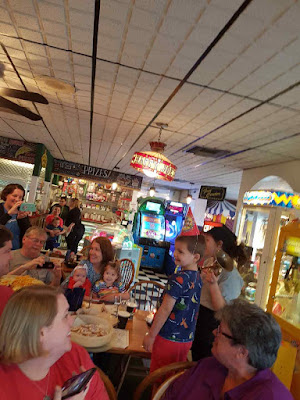 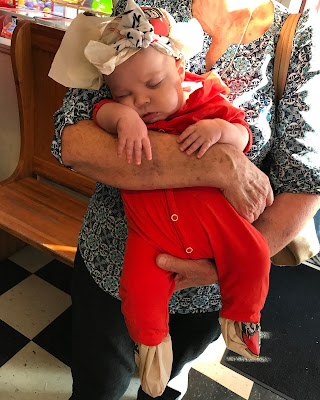 What a blast dinner was!  We were there almost 2 hours and Patrick had a blast with his uncles and aunt Erin playing all of the games and playing with Rosie and Cole.

His most favorite part was having everyone sing Happy Birthday to him.  He was beaming and I couldn't stop smiling at him!  He was truly having his best birthday ever.

He did really love riding on the horsey too -- Rosie, not so much. Haha!

After a fun-filled evening at Happy Joe's with family we headed home and Patrick got to play with his new race track. 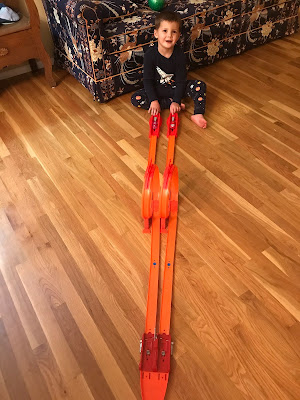 This is the first time I can remember that he elected to miss his TV show before bed (either Paw Patrol or Mickey & the Roadster Racers) and play instead!  He was so excited for his new birthday presents and couldn't stop playing!

He shockingly went to bed without a peep (probably cause Rosie was at NeeNee's for Rosie Wednesday tomorrow) and passed out about 2 seconds after his head hit the pillow.

All in all I think he had a wonderful birthday (as did we all celebrating him!!) and we cannot wait to see what 4 has in store for our favorite little dude!  Happy birthday Patrick, we are so lucky to call you ours!!
Email Post
Labels: 4th birthday birthday family family fun favorite four four years old happy joe's party Patrick