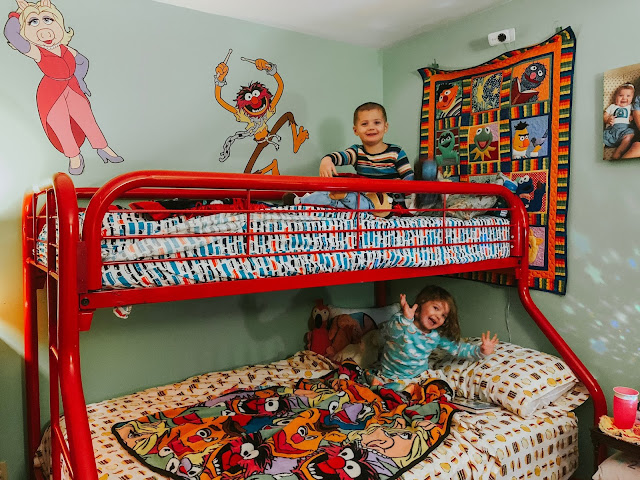 Monday was a BIG DAY for these two: they officially got NEW (to them!) bunk beds!  They had both been sleeping in toddler beds for almost a year -- Patrick for nearly TWO years and Rosie for almost a year since we ditched her crib shortly after she turned 2 last year.  We have had these bunk beds we got from a family friend in our basement for a good year or two -- they have been our 'guest room' next to the ballpit for anyone who would stay with us and needed a place to sleep.  We had always planned on having the big kids use them but we didn't really know when!

Welp, I had planned to surprise the big kids when they got back from Florida with a new room setup...however, seeing Patrick literally curled up barely fitting in his too small for his 50 pound self toddler bed, I knew we needed to switch them NOW.  So I moved their beds downstairs, rearranged their room, and then when Mike got up he helped me bring up the bunk beds from the basement into their new room!


To say they were excited was an understatement -- THEY FLIPPED!  They were SO EXCITED to go to sleep Monday night -- and then again on Tuesday!  Rosie spends the night on Tuesdays with KiKi and NeeNee's and she always loves going but she was a little sad she couldn't sleep in her 'new bed' that night!  I told her it would be there waiting for her on Wednesday night. 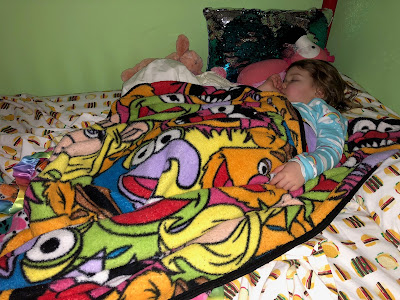 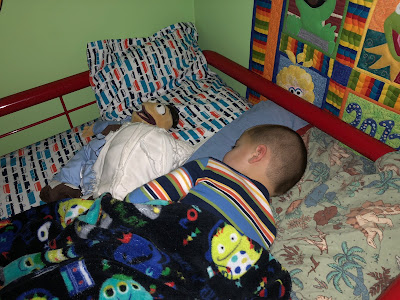 Both of them truly loved sleeping in their new spots (and BIGGER spots!!) and neither of them fell out of their beds either, so yay for that!

I am loving their new siesta spots and LOVE that they love them too.  I also am so thankful for such good sleepers AND that they love sharing a room together!  That will make Disney easier since they are already use to not sleeping alone!

Here's to some great nights to come...and I'm sure it's just a matter of time before P crawls into bed with R or vice versa.  Hope I'm there to document that! Haha!
Email Post
Labels: big boy bed big girl bed bunk beds bunking up new bed Patrick Rosie