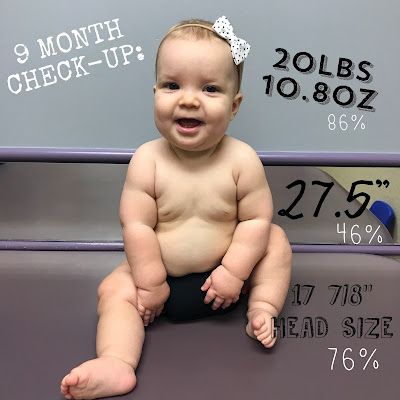 Ahhhh, our little Annie Banannie is officially 9 months old (today!) and had her check-up at the doc's office this morning! 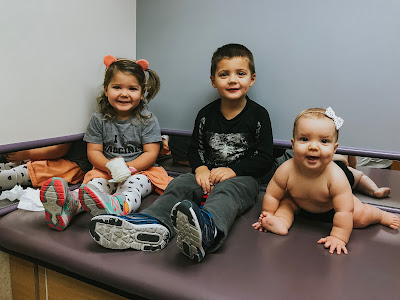 I actually brought ALL THREE KIDS with me for her checkup so they could get flu shots as well since we were going and, oh boy, what a treat that was to bring all of them before school...on Halloween no less!  HAHA! 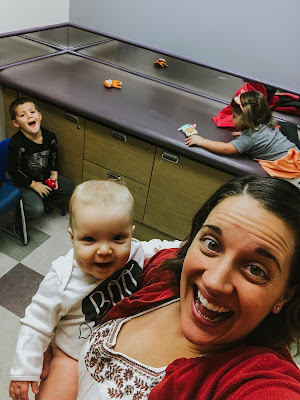 Honestly it wasn't bad at all -- we were in and out in less than 20 minutes (which is a freaking record cause I swear even with just one kid we are in there at least 45 minutes!) and the big kids were shockingly really good for both their flu shots (just a few tears for Ro) and then during Annie's checkup.

So!  Annie Banannie at 9 months old.  Welp our little meatball is just that: short and fat!  Her weight is right where it's always been (big) but her length/height has kinda been declining since she was born.  She's only in the 46% this month for length!  Rosie at 9 months was an inch longer at 28.5" so not significantly bigger but yeah, Annie is still our little peanut.  The doc just mentioned that on that growth curve she's been declining, but we'll just see where she is at 12 months.  She didn't seem concerned and I'm not either because this kid is eating and drinking like a champ and hitting all of her milestones (minus moving, she doesn't crawl or really move right now but that's the same as Rosie did!) so I'm sure she's just gonna be a chunky short little thing for now and that is a'okay!  Other than that nothing else exciting to report other than she got her last Hep-B vaccine and first half of her flu shot (she'll get the other booster in a month).  So yay for vaccines, just like Rosie's shirt!

That's about all I've got for Annie's 9 month checkup...I cannot believe that the next scheduled time she'll be back at the doctor is AFTER she is ONE!  Where or where is the time going??!  Slow down please...it's going way too fast!!
Email Post
Labels: 9 months old Annie Check up check-up doctor's office flu shot grow growth milestone